Yesterday’s tea party at the Pavilion on the Downtown Mall in Charlottesville attracted about 1,500 people, which was a huge turnout, given the abominable weather. I didn’t think there were that many conservatives in Charlottesville, so the organizers must have bussed them in from Greene, Farmville, Lunenburg, Lynchburg, and all those other nests of gap-toothed inbred mouth-breathing right-wing extremists that abound here fin the Virginia heartland.

Seriously — there are more conservatives in Charlottesville than you might think; but they’re not much in evidence except in times of crisis. And recent events demonstrate that a singular moment of crisis has arrived.

This was the sign that Dymphna and I made and brought with us to the event: 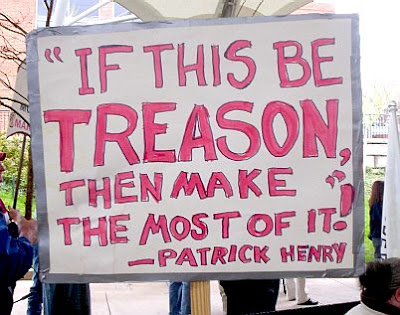 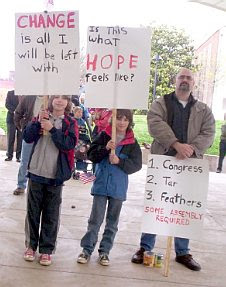 The quote comes from a famous speech by Patrick Henry in the House of Burgesses in Williamsburg on May 29, 1765. According to the account in John Burk’s History of Virginia, Mr. Henry was inveighing against the odious stamp act imposed on the colonies by George III:

“Caesar,” said he, “had his Brutus, Charles his Cromwell, and (pausing) George the third (here a cry of treason, treason was heard, supposed to issue from the chair, but with admirable presence of mind he proceeded) may profit by their examples. Sir, if this be treason,” continued he, “make the most of it.” 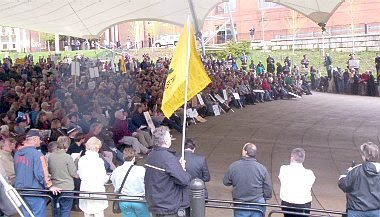 Charlottesville takes great pride in celebrating its status as the home of Thomas Jefferson, and this occasion was no exception — the atmosphere was decidedly Jeffersonian. Our third president was quoted frequently during the proceedings, and the theme of the American Revolution was constantly in evidence. The Master of Ceremonies was Joe Thomas of WINA, who dressed up as Tom Paine for the occasion.

The first speaker was former Secretary of State Lawrence Eagleburger. He spoke after I dropped Dymphna off while I was still parking the car, so I can’t tell you what he said.

He was followed by John Taylor, the chairman of Tertium Quid. After that came Karin Agness, a UVA law student, who spoke from a student’s perspective about the parlous state of higher education in America. She was acting as a de facto spokesman for the young people in the crowd, who were fairly well-represented, especially considering that it was the middle of a cold and dreary weekday. 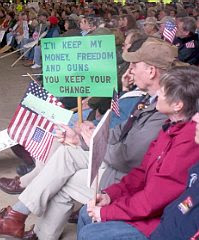 An Iraq War veteran named Matthew Thomasson was one of the more interesting speakers of the day. Not only did he have relevant anecdotes from his tour of duty in Iraq, but he spoke knowledgeably on a number of other issues that are familiar to regular readers of this blog. He was the only speaker to mention sharia law, and he also mentioned the attempts made by the European Union to coerce the people of Ireland into voting for the Treaty of Lisbon.

He concluded his talk with a rousing recitation of the Military Oath of Enlistment:

I, Matthew Thomasson, do solemnly swear that I will support and defend the Constitution of the United States against all enemies, foreign and domestic…

By the time he reached “So help me God” at the end, a good portion of the audience was reciting it with him 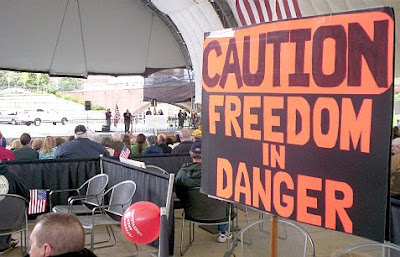 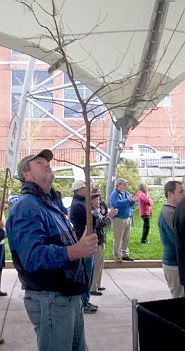 Almost everyone at the tea party was carrying a sign, but some had other sorts of props.

A man next to us was carrying a money tree, made out of a cut sapling festooned with phony dollar bills.

There were various forms of tea party hats, usually red, white, and blue, with tea bags hanging from them or affixed to them.

Several families had children carrying signs that were designed to be read in sequence — see the photo near the top of this post for a representative example.

How is it possible that the 58th District can elect a Republican? After all, Metro Charlottesville is one of the most liberal cities on the East Coast — they don’t call it “Berkeley East” for nothing.

During the election last fall, the city was a virtual sea of Obama yard signs and bumper stickers. It’s home to Peace Cooperatives and Transgendered Food Banks and Women’s Socialist Revolutionary Collectives and every other imaginable trendy lefty activity, ranging from bright pink all the way to Barricades Red.

Notwithstanding this ambient political atmosphere, Rob Bell is the district’s Republican delegate, and the Pavilion was full of people who applauded everything he had to say. As the afternoon wore on, the weather got so cold and windy that Dymphna and I retreated to the visitors’ center to keep warm, and were unable to hear the last few speeches. After the speakers finished, the remaining audience formed a column and marched to Rep. Perriello’s office on Garrett Street. The organizers insisted that we refer to our procession as a “parade” rather than a march, to keep the City Fathers from being alarmed by our right-wing extremist terrorist activities.

For some reason, no counter-demonstrators were on hand to shout as us as we passed. Maybe the bad weather kept them indoors. At the corner of 2ns Street I saw a handful of people wearing Obama shirts watching us, but there was no overt antagonism. 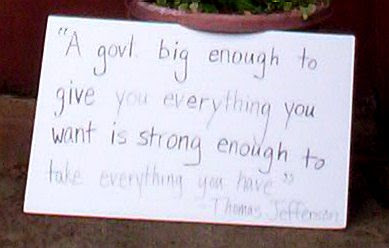 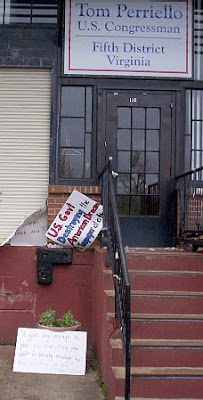 When we arrived at Mr. Perriello’s office, everybody left their teabags on the doorstep or the windowsill. A number of people deposited their signs against the wall. There was no sign of any activity from inside the office.

John Munchmeyer, the chairman of the Libertarians, gave a brief speech thanking us for participating. After that the dogged remnant headed back through the cold rain to a restaurant on the Downtown Mall.

Food, beer, and coffee were most welcome at that point.

I talked to some of the Libertarians for a while about the recent Homeland Security report, which designates as potential terrorists those who support a third political party or recognize state and local authority over federal authority. In other words, all of the people in that room yesterday evening were potential terrorists, according to the official criteria put forth by Washington. Strictly speaking, anybody who wishes to abide by the United States Constitution might come under suspicion as a terrorist. 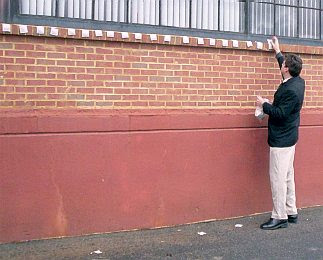 With 1,500 terrorists-to-be gathered in the heart of Charlottesville, there must have been at least one federal agent keeping us under observation. At least that was my theory — but recent events have brought out my paranoid tendencies, so who knows?

I entertained myself during the tea party by watching the people at the edge of the crowd, trying to spot someone in nondescript normal attire who might be an FBI or DHS employee charged with monitoring the tea party.

There was at least one fellow who matched the profile. He wore average clothes with no political buttons or stickers. He carried no sign or other paraphernalia. His expression never changed, and he never clapped or booed, showing neither approval nor disapproval of the proceedings.

He stayed on the perimeter outside the canopy along the upper walkway, even when the cold rain and wind came in. For a while he watched from the south side, and then later sauntered around by the visitors’ center and stood at the railing on the north side. He just observed, turning his gaze slowly from one side to the other, looking at different parts of the crowd.

Later he disappeared down Main Street into the Mall, and I thought he was gone. But he returned a minute later, and walked slowly up by City Hall. After that I lost sight of him. I looked for him again on the Mall during our “parade”, but he didn’t appear.

It made me wonder what exactly he was doing there, and what his job might be. He seemed to be keeping an eye on us.

But, then again, I’m paranoid.

10 thoughts on “The Charlottesville Tea Party”