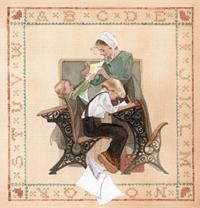 This week’s Carnival of Homeschooling is hosted by our good friend the Headmistress at the Common Room.

Reviewing one of the Carnivals is always an enjoyable task — the entries make for a refreshing change from my usual reading material.

In the face of ongoing cultural degradation and the decline of public education, it’s also a reminder that the intellectual foundations of Western Civilization are not being entirely neglected. Quietly, without a lot of fuss and fanfare, hundreds of thousands of American children are being properly and thoroughly educated by those who care about them the most — their parents.

The most interesting post in this week’s Carnival comes from the Thinking Mother, and concerns LEGO playing and brain dominance:

To check this and to reinforce its accuracy, read about those brain dominances and then apply the criteria to other aspects of the child’s personality and learning preferences.

Go over to the Thinking Mother for the rest of her analysis, and for links to her sources.
– – – – – – – – –
My favorite topic is always math. Not everyone can appreciate the fun of factoring trinomials, but Denise at Let’s Play Math! and I do. Make sure to visit her post for the visual gag — if you have even a basic grasp of algebra, you’ll appreciate the joke.

Most homeschool teachers are mothers, and I was generally the odd one out as a homeschooling father. But Dad’s Homeschool Blog demonstrates that I wasn’t the only one. Check out his post on a topic that most males can get interested in — weather observation and forecasting:

As you know weather reporting stations are located across the country but the weather between any two of those stations can vary dramatically. The result is that forecasts must be more general in nature and creating accurate forecasts for specific areas is extremely difficult. The other problem that plagues forecasters is that the computer models use historical data that was collected at the weather forecasting stations. While this data covers decades and in some cases more than 100 years, it is woefully lacking in coverage. In other words the distance between reporting stations is to great for the historical records to help the computer models predict more localized precipitation amounts accurately. What is the solution? Enlist the aid of volunteers and increase the number of reporting stations by as many are willing to participate.

Enter CoCoRaHS — Community Collaborative Rain Hail & Snow Network. This organization was born out of the Colorado State University after a flood devastated Fort Collins in 1997.

Check out Weather Studies — Be Part of a Nationwide Reporting Network for more.

Here’s a sensitive topic that all homeschoolers are familiar with: the awkwardness and disapproval you face when you tell someone outside the immediate family that you’re homeschooling your child. SwitchedOnMom at The “More” Child writes about Breaking the News. It was difficult to choose an excerpt, so I recommend reading the whole thing.

My homeschooling days are more than ten years in the past, but things don’t seem to have changed all that much. Telling someone that you’re homeschooling your kid — especially if that person has children in the public education system, or did at one time — can be a fraught occasion. Because it seems to attack one of their fundamental social beliefs, people tend to take your decision as a personal judgment against them. Rather than simply doing what’s best for your child, you’re casting aspersions on their decisions about how to raise their own children.

This negative reaction is compounded by the fact that many people may unconsciously realize that most public schools are crappy places, tax-funded warehouses for children in which any actual education is usually an accidental byproduct. Lots of parents would rather have their children in a different environment, but can’t afford private school, and lack the skills or patience required for homeschooling — assuming that their finances would allow for one parent to stay home with the children.

So a defensive reaction is understandable, and a homeschooling parent can expect one ore more of the following responses:

Not to mention the unstated but frequent assumption that you must be some kind of Christian fundamentalist nut to engage in such an anti-social activity.

Dymphna and I developed a series of standard responses to such reactions. We might say sarcastically, “Oh, right — I’ve noticed what an excellent job the public schools are doing at socializing children. Mere parents could never hope to do better than that!”

Or we would point out that homeschooled children score significantly above institutionally-educated children on all standardized tests, and perform better when they get to college.

But it’s also a good idea to have compassion for people who don’t enjoy the luxury of homeschooling. Their children are not going to fare as well under the care of the NEA Mob as homeschooled children do, and some parents probably realize this fact.

For the rest of the Carnival entries, visit the Common Room.

2 thoughts on “The Carnival of Homeschooling”