Note: Since it’s no longer April 1st, I’d best tell you that this post is an April Fool’s joke.

This story isn’t available yet online. A reader in Ithaca, New York, sent us the following article scanned from the print edition of this morning’s Ithaca Register-Advertiser:

AMMAN, 1 APRIL (Reuters) — Geert Wilders, the controversial Islamophobic Dutch politician and head of the Party for Freedom, was extradited to Jordan today to be tried for blasphemy against the Prophet Mohammed — a charge which carries the death penalty under Jordanian law. The Ministry of Justice in the Netherlands waived any objection to the Jordanian action, paving the way for the politician’s arrest. Agents of Interpol assisted the Jordanian embassy as they removed Mr. Wilders from his hiding place, handcuffed him, and led him to a waiting helicopter. 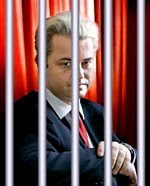 Mr. Wilders will be arraigned on Friday in a Fiqh Court in Amman, and justice is expected to be swift. The prosecutor and the trial judge have already agreed on a “just verdict which will be pronounced upon the head of the filthy infidel blasphemer after a fair trial under the strictest and most impartial principles of Islamic jurisprudence.” After his trial on Monday he will be beheaded in a public square in downtown Amman.

The blasphemy charge stems from the production of Mr. Wilders’ movie Fitna, which was deemed insulting to the Prophet due to its inclusion of verbatim quotes from the Koran. But additional charges have been filed against the leader of the PVV for insulting the Prophet by publishing the Mohammed cartoons.

When Mr. Wilders’ lead attorney pointed out that the Mohammed cartoons were in fact Danish and not Dutch, the Jordanian prosecutor replied, “Danish, Dutch, what’s the difference? The Danes are just as blond as the Dutch. Besides, we have been unable to catch Kurt Westergaard.”

Mr. Wilders did not agree to surrender to the Jordanian authorities until they met his demand that he be allowed to eat pork while incarcerated in Jordan. Under a compromise agreement, a team of Assyrian Christians were flown in from northern Iraq to transport, handle, and cook pork products for the prisoner. Thus, while he is in jail awaiting execution, Mr. Wilders will be able to enjoy traditional Dutch meals such as sausage and eel pie.

A reporter, speaking to Mr. Wilders in his cell via satellite phone, asked the notorious right-wing extremist whether execution might put a crimp in his political career.

“Not necessarily,” he replied. “Jan Peter Balkenende, our current prime minister, is living proof that one doesn’t need a head in order to rise to the top in Dutch politics.”

Mr. Wilders, however, remains optimistic. “I think I will be vindicated,” he says. “When I finally get a chance lay out my case before an impartial court, the judge is bound to agree with me that Islam is not a religion, but a totalitarian political ideology.

“But in any case,” he adds cheerfully, “I shall at least be able to eat decent food while I await the axe.”