Last Saturday night, under the auspices of the David Horowitz Freedom Center, Geert Wilders spoke to an audience in Beverly Hills about freedom of speech and his movie Fitna. 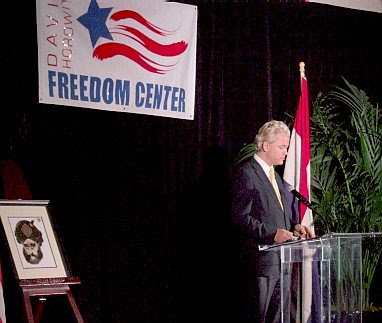 To the left in the photo you can see print #1 of Kurt Westergaard’s Mohammed cartoon, which had been auctioned off immediately prior to his speech. As I mentioned on Saturday, a signed and numbered limited edition of the Turban Bomb print is being sold to raise money for the International Free Speech Society, which co-sponsored the event in Beverly Hills. For more information on purchasing these prints, see my earlier post.

Here’s what Mr. Wilders had to say at the Beverly Hilton:

Since I met Geert Wilders in Washington on February 26th, his party — the Party for Freedom — has become the most popular political party in the Netherlands:
– – – – – – – – –

(Angus Reid Global Monitor) — The far-right Party for Freedom (PVV) [acronym corrected — BB] is rapidly gaining popularity in the Netherlands, according to a poll by Maurice de Hond. A prospective tally of seats shows the PvdV would get 32 mandates in the next legislative election, up four since mid-March.

The ruling Christian-Democratic Appeal (CDA) is second with 27 seats, followed by the Labour Party (PvdA) with 22, Democrats 66 with 18, the Socialist Party (SP) with 17, and the People’s Party for Freedom and Democracy (VVD) with 15. Support is lower for the Green Left (GL), the Christian Union (CU), the Party for the Animals (PvdD), the Reformed Political Party (SGP), and Proud of the Netherlands (ToN).

In just five weeks, the PVV has moved from second to first place, and would gain six seats in parliament. If an election were held today, Geert Wilders would become the next prime minister of Holland.

So things are looking up for the Counterjihad — at least in the Netherlands.