Jihadi fighters in an impoverished Islamic backwater take stage directions from a cameraman, and their simulated actions are filmed and retailed in the West as an authentic video of events.

Am I talking about the Gaza strip? Is this “Pallywood”?

No, I’m talking about the Finnish Somali pirates. Maybe we should call it “Somaliwood”.

Most people have heard about young Somalis in Minneapolis who left Minnesota to return to their ancestral homeland and wage jihad and/or commit piracy.

But Minnesotans aren’t the only ones getting a piece of the action: young ethnic Somalis from Finland have returned to Somalia to join the trendy pirate scene.

KGS at Tundra Tabloids has posted an exposé of a stage-managed documentary that was snapped up by the gullible folks at ABC’s “20/20”. They don’t understand Finnish any better than I do, but Gates of Vienna employs better fact-checkers than ABC does.

It seems ABC got scammed. Here’s the story from Tundra Tabloids: 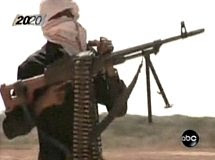 So that’s where all our Finnish Somali refugee males are going, to rake in the big dough for the jihad!

At 20 seconds into the two and a half minute film clip, the Finnish director shouts to the jogging jihadi: “ja takaisin samalla lailla, se näytti hyvältä.” (And come back the same way, it looks good).

What makes the already juicy story of Somali refugees from Finland going back to Somalia to wage jihad and earn a wad of money, while a Finnish documentary crew directs them in Finnish, even juicier, is that the cameraman, Jussi Arhinmäki (click for a video of him), is brother to a member of the Finnish parliament, Paavo Arhinmäki, for the Leftist party (Vasemmisto).

He also goes on to ask the all important question of why didn’t the Finnish film crew ask about how many other Somali refugees from Finland are currently in the area, plying the seas for the jihad? But then again, since they’re directing the subjects they are interviewing…well, I don’t think that the thought would have ever occurred to them.

Kullervo Kalervonpoika also asks: “On the other hand, it would be also nice to hear what the Member of Parliament, Paavo Arhinmäki thinks of his little brother’s tinkering, and if he is somehow involved in the matter?”

BIG QUESTION IS, does ABC 20/20 know about what the Finns did? Has anybody out there seen the documentary in question?

Go over to Tundra Tabloids for more translations and a summary of Kullervo Kalervonpoika’s account of how John Hakalax and Jussi Arhinmäki got the pirate gig.

This story, like so many others, is a reminder of how much of today’s MSM reporting is faked and manufactured and stage-managed to fit the agenda of the corporate behemoths that peddle the news to us.

If the story aligns with the conventional wisdom, then it doesn’t have to be literally true. The people who organize it, record it, and report on it probably believe that they are doing the right thing, even when they stage events and produce faux documentaries.

But the case of Mohammed al-Dura and France 2 shows how far media reporting can diverge from what is commonly known as “the truth”.

And now we can add the ABC news and the Finnish Somali Pirates to the list of faux-reporting.

Let’s hear it for Somaliwood!

Note: The term “Somaliwood” is already in use, and refers to the Somali expatriate film industry in Ohio.

4 thoughts on “And Now: Somaliwood!”