Christians Outraged by Jesus Made out of Lego 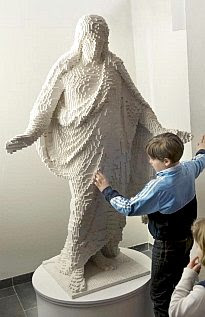 April 12 (Associated Reuters) — Christians took to the streets all across Scandinavia today to protest the unveiling of a statue of Jesus made entirely out of Lego blocks.

One angry demonstrator, dressed in an “I (heart) Jesus” T-shirt and wearing a cross around his neck, told reporters that Christianophobia must not be tolerated. “They can’t insult our Savior this way! There are 2.1 billion Christians in the world, and we will not sit idly by while our Messiah is dishonored!”

He added, “I believe in free speech, but there are limits.”

The Swedish government assured the Christian community that the perpetrators of this cowardly act would be found swiftly and brought to justice.

All right, I admit it. I made up the above news story.

But not all of it. There really is a Lego Jesus. According to Danish TV, a life-sized statue of Jesus built entirely of Lego has been unveiled in Önsta Gryta Church in the Swedish town of Västerås.
– – – – – – – – –
It’s built of 30,000 Lego blocks, and its creators emphasize that no glue was used in its construction. The statue has a steel rod in its center and a stone in its base to stabilize it, but the rest is made up entirely of interlocking Lego blocks.

The project took more than a year to complete, and the church was packed when the statue was inaugurated at today’s Easter service.

The work is a Lego replica of a famous 19th-century statue by the Danish sculptor Bertel Thorvaldsen. The original resides in Copenhagen Cathedral.