Earlier today I mentioned briefly the recent increase in the incidence of arson at schools in southern Sweden. Malmö, which has a large population of Muslim immigrants, saw one of the greatest increases.

Our Swedish correspondent LN has risen to the occasion and translated the article from Sydsvenskan. The accompanying map was adapted from a photo at Snaphanen:

The number of emergency calls for fires in Scanian schools last year reached a new high. The worst increase has been in Helsingborg, with almost twice as many emergency calls as the number two place: Malmö. 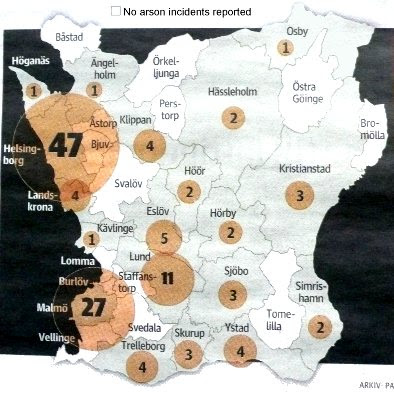 Even for the country as a whole there were more emergencies than ever last year.

“It is the pupils who set the fires, and I say that nine out of ten fires are arson,” says Björn Björkman of the Fire Protection Association.

He thinks it is a problem that schools have been slow to realize that the cause of fires is in the attitudes and in the adult approach to the pupils.

“There has been a numbing, when teachers think it is natural for fires to be set once or a few times per semester,” says Björn Björkman.

The point is that students must feel seen, heard, and affirmed.

In ten years, the number of school fires in the country increased by about 70 percent to 511 incidents, according to new statistics from the Swedish Agency for Public and preparedness, MSB.

The figures are for fires which have caused an emergency for the fire brigade.

In Skåne the increase is 340 percent over the same period. The increase was most significant between the years 2007 and 2008, when the number of emergencies rose from 73 to 127.

That means one in four emergencies occurred at a Scanian school, with Helsingborg having the maximum.

Björn Björkman of the Fire Protection Association says that most fires occur at midday. Often a fire is started in a trash can. The dramatic fires, however, are set during evenings and nights.

In Helsingborg, Thomas Johnsson has no prescription for how the fires will be reduced. A few more technical solutions, more cameras are not seen as a help. Fires and alarms have come from schools that are already supervised.

“There has been some kind of fad among troublemakers at school to summon the fire brigade,” he says.

But perhaps the tide has turned in Helsingborg. Thomas Johnsson says that the number of emergencies has been fewer in recent months.

5 thoughts on “A Burning Desire for an Education”