A reader from Los Angeles wrote us yesterday with the following tip: 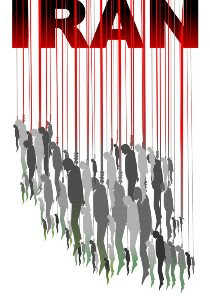 In case you haven’t seen it, there is an article at Jihad Watch about an art exhibit that has been banned in Norway.

The artist is the Iranian dissident Ahmed Mashhouri, and the title of the exhibit is, “It is not forbidden to think.” The art illustrates various verses from the Quran, and the art is light years ahead of the Danish cartoons in terms of message and impact. Unfortunately, not all of the legends are translated into English. It would be a great assist to English-speakers to have these graphics translated.

See Islam & Graphic for a complete set of the graphics.

As soon as the exhibit was opened, Muslims began to vandalize it. That means they too are “getting it.”

These graphics should get wide publicity.

We’re only too happy to oblige. Our Danish correspondent TB volunteered to translate the texts that appear as part of the images.

I haven’t reproduced all the graphics themselves, but here are TB’s translations, numbered in the order they appear on Mr. Mashhouri’s blog:

The rest of the posters (from #13 onwards) are already translated into English, or are in Arabic. The translations are visible below the posters.

4 thoughts on ““It is Not Forbidden to Think””