Janez, a Gates of Vienna reader from Slovenia, volunteered to translate an article from 24ur.com about the recent discovery of the remains of Slovenian victims murdered by the Communists.

I must state that I added a few bits of information. For instance, the article never openly states that these were communist atrocities, because it is common knowledge here, but I thought it would be good to clarify. I also added the number of dead found in Slovenska Bistrica and in Maribor, and I added the number of estimated mass graves in Slovenia.

If you would like to see some more photos from the mine, they are here.

And now for his translation: 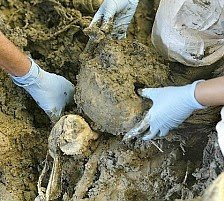 Historians have found a mass grave in Huda Jama near the town of Laško, Slovenia. The victims were supposedly killed on the spot, but it isn’t yet known where they were brought from.

The only eyewitness found so far, the driver who drove the victims to the mine, claims they were Slovenians, while locals believe they were Croats. Further investigations will try to establish the nationality of the victims.

The authorities say that they started work on the location last August and it took them seven months to dig through the concrete walls and the scree that were put there by the perpetrators of the crime in order to prevent the discovery of the bodies. The site has long been on the list of about 600 mass graves of communist atrocities in Slovenia. Work on mass graves and communist killings after WW2 in Slovenia is done by a special team of historians and forensic detectives.

The Slovenian police started investigating communist atrocities that took place in Slovenia after WW2 in 1994. At first they mostly worked on the concentration camp Teharje near the town of Celje, but the investigation soon died down. In 1997 about 1,100 corpses were found in approximately a hundred metres of antitank trenches while a road was being built around the city of Maribor. The police tried to identify the victims as well as the perpetrators, but without success, so the investigation stalled again. In 2001 around 400 corpses were found in a bomb shelter near Slovenska Bistrica — they were killed in 1946 — and at that time the police authorities and the attorney general demanded the investigation be restarted. So the special team was formed for the task. It is estimated that about 100,000 people were killed in Slovenia in 1945 by communist forces. No one has been indicted for these crimes so far.