More British ranting, this time from Aeneas. He’s got a few things he wants to say about Gordon Brown: 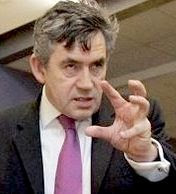 Wherever he goes he is being told facts by world leaders that he could quite easily have gained by talking to people at home. We all know that Gordon has led us to economic and cultural oblivion.

In Chile he was told that they made provision while he made none, and in Brazil he was confronted with the racist rantings of Luiz Inácio Lula da Silva. I dread to think what he was told in Argentina, where he was being buttered up to giving away the Falkland Islands.

Brown is friendless and isolated on the international stage. His has gone looking for friends and found indifference to his plight. He thought other leaders were as stupid as him but he has discovered the truth, that no leader in the world is as stupid as him. He has discovered that he is the most accident prone and incompetent Prime Minister that Great Britain has ever had.

Historians will write about his shortcomings for generations and children will laugh at his example in their schools. If he wanted to be the epitome of what not to do as Prime Minister then he has succeeded, in fact he has exceeded expectations. Congratulations Gordon on a job spectacularly botched in the grandest way possible! I bet you wish Blair was back! Well, time to enjoy wallowing in failure — you’ve made the history books in spectacular style.