The Arabic word da’wa is variously translated as “call”, “summons”, or “invitation”. In most modern contexts it refers to Islamic outreach or proselytizing, what a Christian might call “mission work”.

But it has another meaning, one which most Muslims would rather not discuss. Da’wa also describes the call to an infidel enemy to surrender, to submit to Allah.

On July 14, 1683, Grand Vizier Kara Mustafa sent a call for surrender to the Vienna garrison and the city authorities. According to John Stoye, in The Siege of Vienna, pp 95-96:

Kara Mustafa sent a summons to surrender, framed in accordance with the customary Ottoman demand on such an occasion. A Turkish officer rode up to the counterscarp with a document, handed it to a Croat soldier, and awaited a reply. “Accept Islam, and live in peace under the Sultan! Or deliver up the fortress, and live in peace under the Sultan as Christians; and if any man prefer, let him depart peaceably, taking his goods with him! But if you resist, then death or spoliation or slavery shall be the fate of you all!” Such, embroidered in rhetorical language, was the message. But [commander Ernest Rüdiger von] Starhemberg curtly dismissed the messenger and continued to wall up the gates. Kara Mustafa, says the Master of Ceremonies, bade the guns speak.

[Stoye’s reference note for this passage indicates that his account is based on G. Jakob, “Türkische Urkunden”, from Der Islam, vii. (1917), pp. 269-87. For those who can read German, the full text is probably available there.]

When the Grand Vizier issued his da’wa and promised the citizens of Vienna that they would “live in peace”, he meant the peace of submission, al-salâm, which is the peace that is promised to all Muslims. If the burghers of the city had chosen that route, there would have been some kind of ceremony in which they would have recited the shahada, touched their foreheads to the ground while facing Mecca, and thus declared their submission to the will of Allah.

From then on they would have been Muslims of the Ummah, and would have enjoyed all the rights and prerogatives enjoyed by other Muslims under shari’a — as well as the death penalty for any apostasy from their new faith.

The second possibility for “peace” would be to submit to the rule of their Muslim overlords whilst remaining Christians.
– – – – – – – – –
As dhimmis, their rights would be severely circumscribed, and they would have to pay a tax, the jizyah, simply for the privilege of remaining alive as an infidel. They would be second-class citizens, subject to abuse (and possible sudden death) at the hands of their Muslim neighbors, and forced to wear certain clothing and suffer other humiliating restrictions. 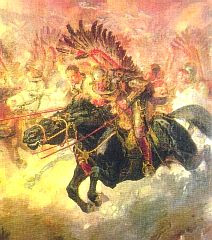 Their third alternative was to do battle with the hosts of Mohammed until they were killed or enslaved.

Kara Mustafa neglected to present the fourth alternative, which was the one that the Viennese actually chose: the city resisted the Turks, held out under siege for two months, and with the help of King Jan III Sobieski of Poland defeated the Ottoman forces. After thus humiliating his sultan, Kara Mustafa was garroted — not quite the outcome he expected.

In today’s context, da’wa as a call to surrender can be seen in masked form under various circumstances. Osama bin Laden has issued his da’wa several times to the nations of the West, calling for our leaders to convert to Islam in order to avoid a terrible fate. Mahmoud Ahmadinejad has done the same thing.

For those who understand Islamic scripture and traditions, the meaning of such da’wa is clear: these Muslim leaders are planning violent jihad against the infidels of the West. Before launching a holy war against non-Muslims, the Koran requires its adherents to offer the unbelievers an opportunity to submit and become Muslims.

Fight in the name of Allah and in the way of Allah. Fight against those who disbelieve in Allah. Make a holy war… When you meet your enemies who are polytheists, invite them to three courses of action. If they respond to any one of these, you also accept it and withhold yourself from doing them any harm. Invite them to (accept) Islam; if they respond to you, accept it from them and desist from fighting against them… If they refuse to accept Islam, demand from them the Jizya [the tax on non-Muslims specified in Qur’an 9:29]. If they agree to pay, accept it from them and hold off your hands. If they refuse to pay the tax, seek Allah’s help and fight them. (Sahih Muslim 4294)

If the infidel is invited to Islam and fails to convert or become a dhimmi, then the followers of the Prophet are justified under Islamic law to use any and all means to force his submission. His life and property become forfeit, and his wife and children may be raped and enslaved.

This, then, is what the dissipated and self-indulgent burghers of the modern post-Christian West can expect.

To anyone who pays attention, the meaning is clear and unambiguous.

10 thoughts on “First the Call, Then the Slaughter”