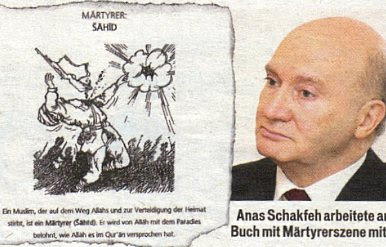 Last week we posted about the active failure of Turks in Germany to assimilate to their host culture. On Friday our Austrian correspondent ESW reported on an alarming opinion survey of teachers of Islam in Austrian public schools. It turns out that those charged with the religious education of Muslim children have a disquietingly high incidence of radical thinking.

The blowback from the teacher survey continues to ripple through Austria’s public discussion. A prominent figure in the current controversy is Anas Schakfeh, the head of Austria’s Islamic Faith Community.

ESW has translated some more German-language material on the topic, beginning with this op-ed by Michael Fleischhacker from Die Presse:

From Mouhanad Khorchide’s study emerges that every fifth Islamic teacher in Austria one way or another has a problem with democracy, and that is alarming. Alarming not only for itself, but also for the Islamic Faith Community which is responsible for the hiring of these teachers. But most disconcerting of all is the reaction of the president of this faith community, Anas Schakfeh.

It is precisely this mixture of false or simulated awareness of the problem, a culture of blame, and a mentality of brushing off those problems, that has been shaping the relationship between the official Austria and the official Islam for years, while out there in real life many problems are continuously accumulating:

This is unacceptable. It also shows that the official Islam, even if it not legitimized its members, is playing a double game: In the official “Dialogue of Cultures and Religions” there are discussions about the compatibility of Islam and European-democratic culture. But in everyday political life these discussions, even if well-founded, are killed by accusing the bearer of the bad news of hate speech against Islam. The FPÖ reacts in a similar way regarding its proximity to right-wing extremism.

This doubly problematic: It confirms the existing preconception about Austrian Muslims officially professing allegiance to human rights, democracy and the rule of law, while on the inside waiting for the possibility to implement their own visions of Sharia. And it weakens those who have been working on a theological basis on something like a “European Islam”, like the Institute of Islamic Education at the University of Vienna.

Unfortunately, Schakfeh has congenial partners in official Austria for his strategy of actively doing nothing: Chancellor [Werner] Faymann leaves it at saying nothing by saying “We should not discuss new law paragraphs”, while the minister in charge, Claudia Schmied, wants “clear picture about the situation on the ground”. If she is saying that until now she has not had a clear picture of reality, it is perhaps not surprising, but also not very encouraging.

Next, an op-ed by Peter Rabl from Kurier:

The critical discussion about Turkish immigrants is long overdue

It’s good news that integration is becoming a central political issue and that sweet-talking these obvious problems with immigrants has finally come to an end. The bad news is that the awareness gained from this objective approach is that many Turkish immigrants refuse integration and are living in questionable parallel societies.

This discussion about immigration problems, which should not be left to the xenophobic political right-wingers, is long overdue. Problems and facts remain problems and facts even if they are politically abused by people like Strache [FPÖ leader].

Last week a German study revealed that Turkish immigrants have the least interest in integration. The distressing results of this study are also valid for Turks in Austria, especially in Vienna.

In the best case, 75% of second and third-generation Turks are graduates of compulsory education; many leave school without proper language skills and reading abilities. Only 4% graduate from high school. Every third girl stays at home after finishing school. The career plan: Housewife and mother.

This results in an unemployment rate among Turkish immigrants of more than 12%, three times as high as that of indigenous Austrians. With the proportion of Turks who are seeking a full-time job versus those who have one, the situation is even worse.

What is today an almost unsolvable problem has its roots in the completely failed immigration policies of the past decades. Cheap laborers — illiterates from Anatolia — were hired for the worst and most menial jobs. And under the title of “family reunion” many women and children followed.

Because of their illiteracy, the first generation was unable to encourage its children to seek proper education. Instead, these families secluded themselves in their archaic patriarchal family structures and, increasingly, in Islamic religiosity and in Turkish nationalism.

There are tens of thousands of immigrant Turks who live in a parallel world between mosques and Turkish satellite TV programs in their homes. Their chances of integrating fail because of their own reluctance and their insufficient German language skills, which have been passed on to many small children. Their chances for low-paying jobs, jobs for which they alone are qualified, are sinking rapidly in the wake of the [economic] crisis. A sort of sub-proletariat is now being formed, dependent on welfare payments.

One must start considering whether those unwilling to integrate should be sent back to their home countries, perhaps with the help of financial incentives.

For their own good and that of the host country.

Finally, what may the death-knell for Anas Schakfeh’s public career, from Wien-Heute:

[See the image at the top of this post]

The news magazine Profil reports in its latest issue about a book used in Islamic religious education. This book was edited by the president of the Islamic Faith Community, Anas Schakfeh. The book shows a “martyr” who is dying on the battlefield. The caption reads: “A Muslim who dies in Allah’s path and in defense of his home country is a martyr (shahid). He will be rewarded by Allah with entry into paradise, just as Allah promised in the Quran.” The picture shows a soldier holding a gun and a hand grenade.

This school book is used for third and fourth graders. Says Schakfeh: “I know this looks really bad, but I had simply forgotten about the existence of this picture. But we are currently working on changing these books.” He adds that this picture in no way wants to glorify martyrdom. Martyrs are part of Christian and Islamic culture, and the picture shows the siege of the city of Medina, the first Islamic community.

“A president of a religious faith group whose religion is determined by martyrs holding a gun and hand grenades must resign immediately. We don’t need Islamic religious warriors in Austria and in our schools and school books, “ says Martin Strutz, secretary general of BZÖ.

In addition, Schakfeh’s confession today about a well-known radical Islamist, member of a well-known Islamist party, who was not only a school coordinator, but now also works as a teacher, show that Schakfeh is not a moderate, but a wolf in sheep’s clothing.

Schakfeh is in real trouble. The Green party has now added its weight into the discussion calling for Schakfeh’s resignation. The Greens have always been vocal supporters of anything Muslim. This study, alongside the troubling German study about the lack of integration among Turkish immigrants, is causing the Muslims a lot of heartache. The pressure is increasing. It’s a pleasure watching these events unfold. Taqiyya is failing them!