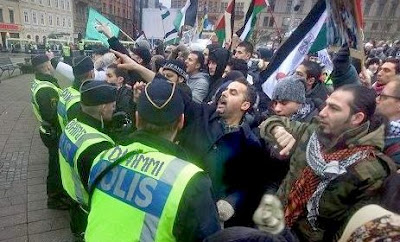 Now Ted Ekeroth reports that the manifest indifference of law enforcement to multicultural violence was no accident — the police were under orders not to interfere.

According to the newspaper Skånska Dagbladet, a police officer says that the police assigned to the rally were ordered not to do anything against the pro-Arab mob, no matter how aggressive they became. He said, “There were no plans to intervene against the counter-demonstrators. The only area to be evacuated if there was a situation was the area where the pro-Israeli rally had been given in front of the Town Hall.”

According to Skånska Dagbladet, the officer who gives them this information is “well informed” on how the police task force works. He wishes to be anonymous. He continues:

According to Ted, the police have an internal directive that mandates a response to situations like the one that occurred in Malmö. It reads:
– – – – – – – – –

“If counter-demonstrators, by screaming or yelling or in any other way, acts in a way that disturbs, they can be found guilty of ‘interfering with a public gathering’“

The justitieombudsmannen (Justice ombudsman) stated in 2008 that

Skånska Dagbladet interviews a professor in law. He says that:

With all this, the police chief Ulf Sempert, continues to lie and mislead…

This means that the “culturally enriched” areas of Sweden have effectively been handed over to mob rule. The law has little or no meaning in these neighborhoods, and the police stand by and do nothing while the “New Swedes” harass, threaten, and commit violence against “persons of Swedish background”.

This can’t go on.

The only questions are how long it will be until the native Swedes are unhappy enough to change the situation, and how ugly and unpleasant that process of change will become.

Go to Ted’s blog to read a longer version in Swedish, or see the Google translation of it here.

And, yes, the image at top is a photoshop job. Thanks to KGS for creating it.

6 thoughts on “Malmö Police Ordered Not to Interfere With Muslims”