Sometimes, those who are ashamed of their history or traumatized by its events attempt to erase the evidence. This holds true for individuals, families, communities and nations. It is also often the case that the more repressive the family or cultural dynamic, the more details of its history will be obliterated.

The online Weekly Standard has a story about Iran’s latest attempt to wipe out some of the baser incidents in its recent Islamic past. The rationale? Getting rid of the ugliness will somehow make the celebration of their thirtieth anniversary less cruel and vicious. Good luck on that.

Another characteristic of tyrannies is how tone deaf they seem to be. Does Iran really believe the sounds of roaring bulldozers have the power to create mass amnesia in its citizens? Evidently it does: 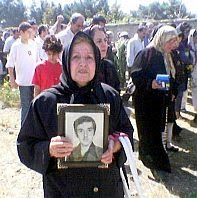 Twenty years ago, some 10,000 political prisoners and regime opponents were brutally killed following a fatwa from then supreme leader Ayatollah Khomeini. The executed, some as young as 15 or 16 years old, were buried in mass graves. Many of the political prisoners were affiliated with radical left-wing groups and the Mujahadeen-e-Khalq (aka People’s Mujahedin of Iran). Some of the prisoners were only a few weeks away from finishing their sentences and regaining their freedom when Khomeini gave his fatwa.

This year, the families’ twenty-year-old wound was reopened. To celebrate the start of its fourth decade, the Islamic republic decided that it is time to erase its bloody past. Government bulldozers razed the mass grave of Khavaran, where the majority of the massacred prisoners were buried and where families had placed make-shift memorials for their loved ones. Reportedly some trees were planted over the site.

Khavaran is perhaps the most famous political grave-yard in Iran. The Islamic regime’s early victims, hundreds of the late Shah’s supporters, were buried by their families in cemeteries throughout Iran. Some were buried with assumed names to protect their grave sites. Khavaran is different; it was never a cemetery. It was a piece of undeveloped land next to a Baha’i cemetery, where most of the buried had been executed in 1980. Execution of political prisoners hadn’t ceased in Iran a decade later. 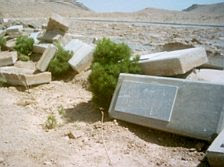 The Baha’i are particularly persecuted in Iran, their cemeteries are often desecrated and bulldozed. When you consider the cranes these Islamic terrorist thugs use to hang their victims high, and the bulldozers employed in covering mass graves or uprooting sanctuaries, the “Republic” of Iran certainly puts some grisly mileage on its heavy equipment.

This is the latest news (dated February 13th) on the fate of some Iranian Baha’i prisoners:

The trial of the seven leaders of the Baha’i Faith in Iran could take place as early as this Saturday, Sunday or Monday. They have been charged with spying for Israel, insulting religious sanctities and propaganda against the Islamic republic. These charges are unfounded and no evidence against them has been brought to light. The Baha’i leaders have been held for nearly a year in Evin prison, denied access to their attorney, the Nobel Laureate Shirin Ebadi.

During the reporting period, respect for religious freedom in the country continued to deteriorate. Government rhetoric and actions created a threatening atmosphere for nearly all non-Shi’a religious groups, most notably for Baha’is, as well as Sufi Muslims, evangelical Christians, and members of the Jewish community. Reports of Government imprisonment, harassment, intimidation, and discrimination based on religious beliefs continued during the reporting period. Baha’i religious groups reported arbitrary arrests, expulsions from universities, and confiscation of property…

So is this up-coming trial supposed to be part and parcel of Iran’s celebratory erasure of the mass graves from the late 1980’s?

Between August 1988 and February 1989, under the presidency of Ayatollah Khamenei, the second massive wave of executions of political prisoners occurred. In all, between August 1988 and February 1989, close to 10,000 prisoners are believed to have been killed in executions around the country. The exact number may never be known. Many of these victims are buried in Khavaran near Tehran.

…There is no high ranking official in the Islamic regime who was not directly involved in the massacre: from the supreme leader who served as president during the massacre to so called ‘reformers’ like Saeed Hajarrian, a senior political advisor to President Khatami who was a high ranking official in the Intelligence Ministry at the time. Khatami has remained silent. He has never acknowledged the massacres, let alone considered bringing those responsible to justice.

Some in Iran, however, have been willing to speak up. Grand Ayatollah Hussein Ali Montazeri, who had been a designated successor to Khomeini, was removed from political power partially because of his opposition to Khomeini’s fatwa. Ayatollah Hussein Kazemayni Boroujerdi, who is in jail for openly calling for separation of religion and state, issued a message from prison: “How sad it is (to see) the official celebration and pride that government controlled official media in Iran demonstrate on the occasion of the anniversary (of the Islamic revolution) while a whole nation is drowning in an ocean of misery, prisons are overflowing with innocent prisoners, and the regime is busily building more prisons to house them.” The massacre victims’ families, in shock from seeing their loved one’s unmarked graves being overturned, easily identify with the dissident Ayatollah.

So. The festivities marking the thirtieth anniversary of the thugocracy of Islamic Iran are going to be celebrated as only the culture of death knows how to do. Perhaps they will invite Jimmy Carter to join them in the commemoration?

Even worse, perhaps the old coot would show up?