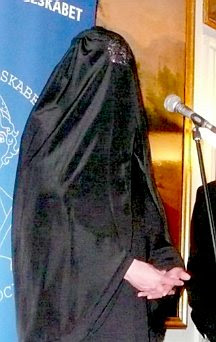 Gregorius Nekschot is a Dutch cartoonist who has been persecuted by his country’s government for his “racist” cartoons. See the bottom of this post for a list of previous posts about him.

The artist spoke tonight at Trykkefrihedsselskabet (the Free Press Society) in Copenhagen, and wore a burkha for the occasion.

Karen Jespersen, the Minister of Welfare (Venstre) was present for his speech. This is very fortunate, since Mr. Nekschot needs publicity — it’s his only protection against the Dutch government.

Below are some excerpts from Gregorius Nekschot’s speech, which was in English. Read the entire text at Snaphanen, where more photos of the event are also available:

Ladies and Gentlemen. In the Netherlands, satire is an old tradition. This tradition began seven centuries ago, in the thirteenth century, with the epic poem Reynaerd ‘the Fox’. The poem Reynaerd ‘the Fox’ ridiculed nobility and clergy — the highest civil and religious authorities of that era. The author must have been a wise man, he managed to keep his identity a secret. Monty Python’s movie Life of Brian pokes fun at Christianity. The movie stirred up anger and controversy in 1979. Nevertheless, the movie could be watched almost everywhere. The makers, Terry Jones, Graham Chapman, John Cleese, Eric Idle and Michael Palin received neither death sentences nor did the Public Prosecutor lift them from their beds and put them behind bars.

These two fairly random examples illustrate that in Western Europe, religion — in the cases mentioned Christianity — has been ridiculed for ages. First this was done anonymously or under pseudonym, later openly. In Western culture, rationalism, science, humanism and democracy, in a lengthy and painful process, created the separation between Church and State. Freedom of Speech became a constitutional right in many countries. Thus, ridiculing Christianity, without fear of losing one’s life, has been possible for quite some time.

When large numbers of migrants with a different cultural and religious background came to Western Europe, things fundamentally changed. Poorly educated — and without exception raised under dictatorial regimes — a lot of immigrants with an Islamic background cannot agree to our separation between religion and politics, no matter how self-evident this separation appears to us.

Monty Python makes fun of Jesus in Life of Brian. A comparable movie about the life of Mohammed — the founder of Islam — is out of the question. The dreadful fate of film director Theo van Gogh says it all. The horrible and sadistic manner in which Theo van Gogh was ritually slaughtered by a fanatical Muslim meant a return to the Dark Ages for the Netherlands as far as the freedom of speech is concerned. Anyone who has the urge to say something about Islam has to do so most carefully.

On May the 13th of the year 2008, however, the cartoonist Gregorius Nekschot was dragged out of his house by ten civil servants and thrown into jail. Moreover, his home was searched and his computer, mobile telephone, agenda and sketchbooks were confiscated. Cartoons that allegedly discriminated against ethnic minorities and against Muslims caused captivity and a far-reaching infringement of his privacy. Such is the state of affairs in the Netherlands, a country which until recently, was seen as broad-minded, ‘free-thinking’, and enjoying a satirical tradition of more than seven centuries.

How do we interpret this arrest? What has changed in the Netherlands in the past years? Why was Gregorious Nekschot, with his skeptical view on the blessings of a multicultural society, thrown into jail? A number of possible motives and explanations present themselves…

So, what has changed in the Netherlands? The present governing coalition of orthodox Christians, Christian Democrats and Social-democrats is an outright disaster. The Christians in the cabinet try to rob the Dutch of their traditional small pleasures. A smoking ban, a ban on prostitution, a ban on smoking weed, and a ban on magic mushrooms have been introduced. The list is longer but, one by one, these are all attempts to teach the Dutch that their life on earth is not meant to be pleasant.

Social-democrats, previously well known for their anti-religious behaviour, appease Islamists with subsidies and preferential treatment. They do this for electoral purposes. For instance, Job Cohen, the social-democrat mayor of Amsterdam, has personally abolished the separation of Church & State in the Dutch capital, only to please Muslim voters.

This poisonous cocktail of religion, religious insanity, Christian opportunism and left-wing self-interest has created a deadly threat for Freedom & Democracy in the Netherlands.

Extremists have already killed a politician and a movie-director in the Netherlands. Now the Dutch State has started to arrest and intimidate artists. It is frightening to see how fast, and how easily, the Netherlands is slipping back into dark times.

In the year 2008 it was Gregorius Nekschot who was arrested and thrown into jail, in 2009 there will be others.

Ladies and Gentlemen, once you trade your freedom for peace, you are doomed. The Netherlands, and I am sorry to say so, has set a very poor example.

2 thoughts on “Gregorius Nekschot in Copenhagen”