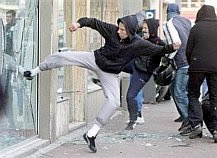 The favorite pastime of “youths” in Europe seems to be rioting.

And, above all, “youths” riot in the banlieues of Paris, torching cars, throwing rocks, and shooting at policemen.

An American living in Amsterdam sent us an email with a report on the export of those French “youths” to a seaside resort in the Netherlands. Once they arrived at their vacation destination, the youths immediately resumed their preferred activity.

Have you heard about the rioting in Zandvoort, Amsterdam’s closest North Sea resort town? Apparently a French NGO wanted to treat the ‘youths’ from the banlieues to a change of scene, but they got out of control.

French picked up for vandalism

The French persons, aged between 16 and 29, turn out to have vandalized and taken away goods. When the vandalism was discovered, a number of these French persons had already departed on the bus.

The police pulled the bus over and arrested 14 passengers. The other 6 French persons were arrested later. A police report was made against all 20 of the suspects.

The bus in which the suspects were riding has been impounded. In it were a number of items originating from the vacation bungalows. The amount of damages is not yet known, but according to a police spokesperson the French persons have ‘destroyed quite a bit.’

The French youths who destroyed two vacation houses in Zandvoort last weekend were in the Netherlands as guests of a social organization. It concerns an institution that targets the deprived youth of the Parisian suburbs, according to the (local) Kennemerland police corps.

The Parisian suburbs have been the scene of massive disturbances in recent years, in which Arab youths set thousands of cars on fire. The social misery in these so-called banlieues is enormous. The nineteen youths of presumably Algerian background have remained in custody since their arrest.

The police are not releasing the suspects for the moment, because eleven of them refuse to disclose their identity, according to police spokesperson Jeroen Groot. ‘It is a difficult group, which already has a bad record in Paris.’ Further, the police desire that the group, or the organization that funded the outing, reimburse the damages before the youths return home.

Damages total at least €15,000. ‘If we let them go now, naturally there will never be payment.’ The Parisian youths had traveled with a single attendant to Zandvoort, where they had reserved cabins with SunParks. As soon as it arrived, the group started causing trouble, for instance by engaging in inappropriate behavior at the swimming pool.

So you see what the French idea is of giving the poor disadvantaged urban youths a trip to the seaside.

Why couldn’t they go to the beach in France?

And you thought it was all about Geert Wilders here this week.

2 thoughts on “France’s Latest Export: “Youths” from the Banlieues”