I just got back from Our Nation’s Capitol, and it will take me a while to catch up.

As you know, I was up there in the belly of the Great Satan to attend two events featuring Geert Wilders. Each involved one or more brief speeches, a showing of Fitna, and then a question-and-answer session.

Both events were sponsored by the Center for Security Policy and the International Free Press Society. The first was invitation-only and took place in the Lyndon B. Johnson Room of the U.S. Senate, at the invitation of Senator John Kyl of Arizona. Sen. Kyle spent a while talking to Mr. Wilders before the speeches started, and I was able to take some photos of the two men conversing.

Unfortunately, I lack skill as a photographer and was using a crappy camera, so the non-flash photos required some work to make them usable. 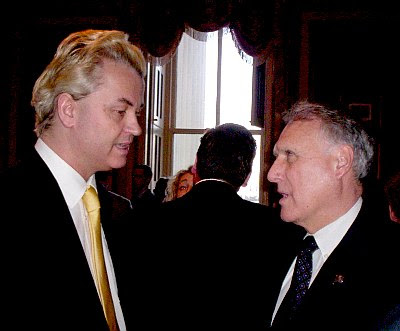 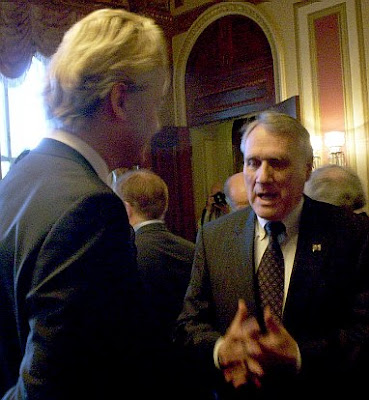 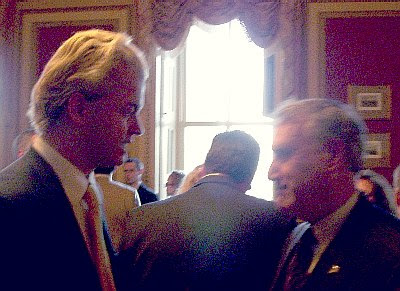 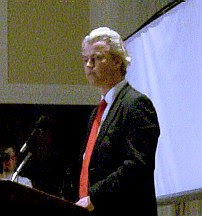 The event this morning took place at the National Press Club, and was attended by various members of the Fourth Estate.

The photos I took there aren’t much good; I was taking them at a distance, and without a flash, so most of them are too blurry to be rehabilitated.

I haven’t had time to look at the blogs, but I’ll bet Pamela has all the skinny on a little contretemps between several well-known bloggers and a journalist who asked a very — ahem — loaded question of Mr. Wilders. Go over to Atlas Shrugs and see what she has to say.

I’ll have more to report about the two events tomorrow, after I’ve had a good night’s sleep and caught up with the email.