Our Austrian correspondent ESW sent us this book review last night. My copy of the same book just arrived in the mail today, so her review is very timely.

A Plague on Both Houses
by Zack Highstreet 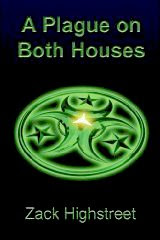 “The War of Ideas will be the most important part of World War IV — the war against worldwide Jihad. We’re in it already, but most people don’t realize it yet.” —Ben

The author himself recommended this book in a notice he sent to members of the Counterjihad. The reason he is using a pseudonym is, in his own words: “This is his first novel and he’d like to live to write another. He takes lessons of Theo van Gogh and Salman Rushdie as serious [sic] as the next terrorist attack.”

Like thousands of others bewildered by the countless terrorist attacks, particular that of 9/11, Highstreet’s novel “rose out of his need for an answer to Why do they hate us so much?“ Using the Quran, the Ahadith, and the Sirat Rasullah (The Life of Mohammed) as the base, he weaves a novel that includes everything a good story needs: An all-American hero who lost his brother in the 9/11 attacks, plenty of villains (mostly Muslim), the FBI, the CIA, Israeli intelligence on a covert mission.

Ben, a computer expert, husband, and father, accidentally comes across and takes over a terrorist website — AlMuminum, or “The True Believers” — “and I’m going to wreak havoc on those mealy-mouthed bastards,” he explains to his wife. And with this website he embarks on a roller-coaster ride. This story includes everything: From Muslim terrorists illegally entering the United States by sea and hooking up with those already present, to the incredible — yet for Muslims so normal — brutality (which Ben and his best friend experience first-hand, no pun intended); from the inter-agency discussions and the resulting standstill and incompetence to the Israelis gathering their own intelligence and one of their beautiful agents causing Ben a romantic headache; from a terrible bacterial agent released by the terrorists to the hero preventing an all-out attack.

Certainly the most important part of the book is Ben’s thorough explanation of Islam and its tenets in great detail to the Israeli agent, though one wonders why the agent would not already know all this. Says Ben:

“The West needs to get its head on straight and define Islam as it should be. It isn’t a religion which is focused on spirituality and growth. It is focused on fascistic ritual and conquest and conversion of all believers, by force if necessary. That’s not a religion — it’s a political system. The kingdom of Mohammed is this world, not the next. Islam isn’t a race in the genetic sense — it is a cultic belief … and when it’s in power it runs things like the Mafiosi.”

“Today the Western nations are strong but blind — like Samson from the Old Testament. Tolerance of everything leads to blindness. Belief systems which threaten the very foundation of society and which aim to overthrow their host societies need to be seen for the threat that they pose. It would be stupid to be tolerant of something that regards me and my children as second class or unclean based on beliefs. It is suicidal to be tolerant of something that calls for the destruction of everything good in this nation. Tolerance can’t be applied to a thing which would destroy that tolerance… Thomas Mann said, ‘Tolerance becomes a crime when applied to evil’.”

The author also provides a solution to the problem of Islam. As this is important, I will quote most of this:

“…The world needs a ‘Project Samson’. Islam is said to made of five pillars — with jihad as the unofficial and most important sixth. Western civilization, Samson in other words, needs to use its strength to pull down the pillars of the Temple Islam. It’s not limited to the West, though. All non-Muslim people, four billion of us, need to focus our strength and join together to defeat the world-wide jihad. We need to target each of the six pillars: the Profession of Faith, Ritual Prayer, Fasting, Alms, the Hajj and Jihad. We need to focus on each one and pull it down.”

“Let’s start with the first pillar: belief in Allah and Mohammed as his messenger. We can pull this one down by showing the Quran can’t be from God and that Allah doesn’t deserve to be worshipped and then we can illustrate the despicable, criminal way that Mohammed lived. Islam is a house built on lies and crimes. Why do you think the call Islam “The religion of truth”. Insecurity. They know Islam is not “true”. They know that when rational, un-biased Muslims are given a choice, with all the facts presented, most would not stay Muslim. Islam as a belief-system is only held together by force. You are to be killed if you leave Islam, […] no criticism of Islam and Mohammed anywhere… It wins using the Appeal of Force and by having the monopoly of ideas wherever it can impose its will. It claims […] that Gospels are true and yet Jesus was not crucified. […] It also claims that Mohammed brought the “final” revelation to something that he didn’t even know about: his religion that claims the Christian trinity is Mary, Son, and Father, which is an error of understanding. It claims that Mary was the sister of Moses, which is an error of history. Its God thinks and behaves like a sociopath and spends more time punishing people in Hell than having a relationship with them in heaven. Allah is distant and creepy, […] Allah commands men to grovel in the dirt five times a day, covering in fear. Put these two things together and it shows a deity not worthy of respect, let alone worship.

“[…] the system is full of historical, scientific and logical errors. It’s not consistent internally either. In fact, the contradictions are so obvious, even seventh-century, illiterate, desert Bedouins could see through Mohammed. [….] Islam knows no real ‘right’ or ‘wrong’. Deeds are justified based on the situation, not by any real ethical standard. The meaning of words changes if they are applied to Believers instead of the Unbelievers.

“We need to tell [the Muslims] Islam is morally bankrupt — and need to point out that it’s irrational in that it has no system of ethics — no objective frame of reference to good and evil. Whatever worked in the Cause of Allah (or his messenger, Mohammed) was permitted. […] A system turns out to be very irrational when it’s based on the actions of a self-serving megalomaniac. He called his religion “Submission”. […] we should rename it “Expedience” since the sole proponent of the system sold out anything if it meant gaining treasure, power or more women. Evidence: the Treaty of Hudaibiyah […]. We need to be hammering away at Islam from every angle so that someday we will get to the point where the ‘bad’ Muslims or the ‘cultural’ Muslims look at it to ask themselves questions like, “Is this what I want to be? Do I want to be associated with this junk? Do I want my son to be this kind of thing? Do I want my daughters to live like this?”

“We need to show them Islam is the problem, not the solution. Show them Islam is a house of cards, is intellectually weak and is as fragile as an eggshell when a person can use logic and rationality without fear of reprisal.”

“We need to disrupt the financial networks terrorists rely on, we need to seize assets: real estate, bank accounts, other financial instruments, when we participation in funding terrorism, whether it be by groups or individuals. Use their assets against them. We need to stop funding terrorism by giving money to the Palestinian Authority. We also need to stop giving aid to countries which implement sharia or which support the imposition of sharia.”

Read the book to find out what the author means by CAD — Corresponding Assured Desecration. It is worth it.

So what is the problem with the book? It’s too much. For a reader who does not yet have much, if any, background knowledge on Islam and its doctrine, the story is incredibly confusing. For the informed reader the book also contains too much information, which makes the book a bit boring. However, the author is to be commended for his efforts to try to weave the countless facets of Islam and its impact on non-Muslims together and for producing a respectable story.

What the author needs to work on if there is to be a successful follow-up is his grasp of English grammar, particularly verb forms. The high number of mistakes seriously minimizes the fun.

2 thoughts on “Book Review: “A Plague on Both Houses” by Zack Highstreet”