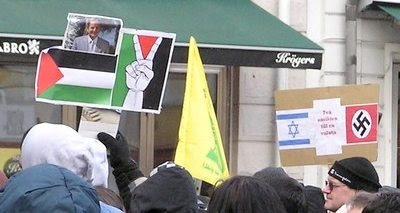 One of our Swedish readers wrote us this morning with news of yet another pro-Palestinian demonstration:

In the small town of Kalmar, on the southeastern coast of New Sweden, there was a demonstration on Saturday in support of Hamas and associates, and of course for lasting peace in the Middle East.

Demonstrators with the right flags arrived in Mercedes cars, along with the valued representative for the local Social Democrats, Mr. Nasim Malik (also called the Ham Sandwich, because he in his agony turned to the Discrimination Ombudsman for damages when he was offered such a sandwich by SAS on a flight to Stockholm).

There are nice photos at Thoralf Alfsson’s blog — have fun!

The assertion that certain demonstrators were hiding their faces, was an utter lie — it was so bloody cold that day, you must know… The keffiyeh and Hizbullah flags were much in evidence at the event.

That’s Nasim Malik on the right, with an unidentified New Swede at the microphone.

Another Swedish contact sent information about some of the grandees of Swedish background who took part in the Kalmar demonstration:
– – – – – – – – –

Among those attending were: 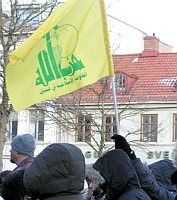 Martin Andersson, the Ombudsman for the SSU, the youth organization for Socialdemokraterna.

The guy in the wheelchair led the crowd in chants of “No peace with Israel”.

See Thoralf Alfsson’s post for more photos, and for larger versions of the photos shown here. If you read Swedish, you’ll probably find more juicy details there about the lefty fans of Hamas who showed up for the festivities in Kalmar.

6 thoughts on “Social Democrats Turn Out for the Terrorists”