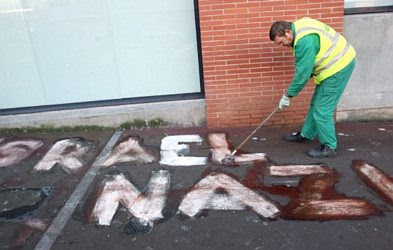 Our Flemish correspondent VH has translated two French-language articles about recent anti-Semitic incidents in France. The first is about the fire-bombing of a synagogue, and was published yesterday by Ligue de défense juive:

A Molotov cocktail was thrown last night at 01:30 AM [January 17] at the synagogue in Hayange near Thionville (Moselle), causing a fire. This was reported by the Jewish consistory in the department and the Jewish community in the city.

“Another, unused Molotov cocktail, was found by police near the synagogue,” said André Fruchtenreich, vice president of the Consistoire israélite de Moselle et délégué régional du Crif [Representative Council of Jewish Institutions in France (CRIF)]. An outbreak of fire was quickly contained by firefighters, and occurred at the entrance to the synagogue. Several people who live on the floor above were evacuated. André David, who chairs the small community of 23 Jewish families of Hayange, recalled that “behind the synagogue a house was built in 1957, a construction that is directly connected to the building. The previous building of 1863 was destroyed by the Germans in June 1940.”

“I understand that these are reactions vis-à-vis the conflict (Israel-Palestine, ed),” he added without further comment. In a statement, the CRIF called on all public authorities to take action against anti-Semitism. “It is unacceptable that an external conflict is transposed to the territory of the Republic,” the CRIF said.

Since the beginning of the Israeli military action in Gaza, the Hayange synagogue is the second target of a Molotov cocktail attack, following the synagogue in Schiltigheim — a suburb of Strasbourg — on the night of January 12 in the Alsace region. Two other synagogues, one in Mulhouse (Haut-Rhin) and one in Lingolsheim (Bas-Rhin), were tagged on January 5 with anti-Israeli [and anti-Semitic] slogans.

Yesterday in Toulouse pavements and walls were tagged at several locations: the inscription “Israel Nazi” on the sidewalks caused consternation among employees of a supermarket at the Allées Pompidou. Others were reported in front of the “Parc des expositions” and also in a street outside a factory. And yesterday, in the late afternoon, a bomb squad destroyed a suspicious bag near the synagogue in the Rue Rembrandt. The same place of Jewish worship was rammed by a car on the night of January 5.

“These excesses are calls for racial hatred and racist violence and are anti-Semitic,” said Prime Minister François Fillon [member of the Union pour un Mouvement Populaire, “Union for a Popular Movement” (UMP), Center-Right party]. Several cities have in fact become the victims of this phenomenon on the margins of the war in Gaza. Rallies for peace in the Middle East have been banned by the Prefects [State representatives] of Nice and Perpignan “to avoid incidents”.

Yesterday, about a hundred people, many of them elected representatives in the Val-de-Marne, were meeting in a sign of support after the arson attack of the synagogue in Villeneuve-Saint-Georges. Meanwhile, the Consistoire central Israélite de France [Representative Council of Jewish Institutions in France] calls on the authorities “to stop the anti-Semitic attacks” and made public the alarming number of 66 formally identified anti-Semitic acts in the last three weeks.

Also in the Val-de-Marne, in Fontenay-sous-Bois, a young man of 24 years was injured Thursday night by two men, who stabbed him with a knife when they found out “that he was Jewish,” as the police stated.

Assaults, vandalism, graffiti, all signs indicate an increase in tension between communities in France, and the will to dialogue seems to have eroded amongst the representatives. For example, the recent resignation of Muslim members of the “Muslim-Jewish Friendship organization of France,” who accused their Jewish counterparts of remaining silent on the “war crimes” of Israel. And in Lyon yesterday, there was a heated debate on the issue at the end of the prayer at the Mosque.

In Mauritius, the singer Enrico Macias had to cancel his concert because he had participated in a rally to support Israel on January 4. And yesterday evening in Vals-les-Bains (Ardèche), the comedian Arthur had to cancel his one-man-show when pro-Palestinian demonstrators prevented the audience from entering the theatre where he was to perform.

Stunned by the discovery of anti-Israel slogans

In large letters on the sidewalk of the Allées Pompidou, behind the library, the slogan “Israel Nazi,” was painted. In the kosher supermarket that has been there for four years, the supervisor and employees are filling the shelves. Their faces look sad, and comments are prohibited. No controversy. “What can I say? This slogan is not an exception. It never stops,” an employee of the municipality who cleans the insults off the sidewalk says.

Similar slogans, perhaps made by the same person(s), were discovered early yesterday morning at the “Parc des expositions” which contains a wedding room. The same on Rue du Férétra and in front of a chemical plant of SNPE at Chemin des Loges. The slogan this time draws a parallel between Zionism and Nazism…

Special teams of the city are very quick to erase those sickening words. Almost too fast. As a result the Central Police investigators were struggling to list the exact number of tags that had been made.

The same at the Rue de la Sainte-Famille, where municipal services were prompt in erasing anti-Semitic remarks, but also those aimed at the police. “Smaller, different,” someone says. Photos were made to hand over to the police. Prosecution is indeed taken very seriously. An analysis of the painted slogans will be released later: a scientific analysis to try to trace the authors who appear to have acted early yesterday morning. “Around 5 AM. When we were at the Parc des expos, as here and elsewhere, the paint was barely dry,” a municipal employee says. The prosecutors said the investigation was in hands of the sûreté départementale [National Police, Departemental investigation service].

4 thoughts on “Anti-Semitic Incidents in France”