From Sweden comes the following juicy report published today on the blog Straight-Backed (Rakryggad) by Weine Berg. Our Swedish correspondent LN sent us the translation, and emphasized this important quote: “United we can change the situation, perhaps! Mass immigration is wage-dumping! 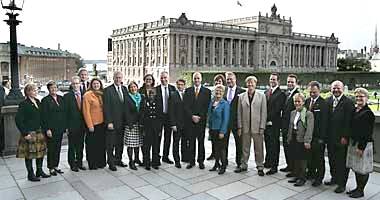 Any competent person could dedicate a whole evening to laughing at the policy of the coalition government. What are they pottering about? Unemployment is rising and the economic situation is anything but pleasing — but we must have more immigration, they have decided. Now the government wants to invest SEK 5.9 billion in benefits and housing costs for asylum seekers and on the National Immigration Board.

The parliament not only voted through this proposal from the government but also a new goal for immigration policy. According to this goal, Sweden is to facilitate movement across borders, protect the right to asylum, promote needs-driven “labor force immigration”, and deepen European cooperation.

In other words, we shall take in more so-called refugees, more migrant workers, and have yet more relaxed border control. Seriously, it is very difficult to understand what the Swedish Government is striving for — have they forgotten what they were elected to manage? Now all they do is entirely to run errands for the market.

This is one of the major destructive events of recent decades — the politicians no are longer working for the people and the country, but for the market, for the globalists, and for money. The top priority is to keep the national economy rolling under the global dictate — people have no real identity that has any meaning for the politicians, but are cogs in the machinery in the form of workers and consumers who may be replaced by means of mass immigration and neocolonizing of Sweden. All the fine phrases about diversity and multiculture are nothing but smoke screens. The sooner more Swedish citizens realize this, the better for country. United we can change the situation, perhaps! Mass immigration is wage-dumping!

4 thoughts on “The Government of Kretinostan”