The Somali pirates have been in the news a lot lately, and their depredations off the Horn of Africa have become so extensive that shipping companies have begun re-routing their ships around the Cape of Good Hope instead of through the Suez Canal. Piracy is a big business in Puntland — grossing an estimated $100 million since the 1990s — and may be the largest source of foreign currency for the failed state of Somalia.

But Somalia isn’t the only source of 21st century piracy, and the Horn of Africa is not the only area where ships and mariners are at risk. Our Flemish correspondent VH sent us an article about a recent incident off the coast of Malaysia. He included this prefatory note:

If pirates are not sunk, shot, or thrown to the sharks at first sight and their harbors bombed back to the 7th century, it won’t be long until Al Qaeda takes over this profitable job. Essential straits are the Achilles’ heel of Western economy (but also for China’s essential trade with the West), and almost all lead past Muslim countries. This one, for instance…

From The Times of India:

KUALA LUMPUR: Knife-wielding Indonesian pirates traveling in two speedboats attacked a coal vessel off Malaysia’s southern Johor state, a report said on Friday. Malaysian police said the vessel was sailing from Singapore to Thailand when it was intercepted and boarded by ten pirates at about 9pm (0630 IST) yesterday, state news agency Bernama reported.

“Pirates with knives stole cash and handphones from the crew, mostly Indonesians, before vanishing without injuring anyone,” district police chief Johari Jahaya told Bernama. He said the vessel was attacked 10 nautical miles off the tourist resort of Tioman island in Malaysia’s east coast state of Johor, in the South China Sea.

Johari told Bernama the crew reported losing 16 million rupiah (USD 1,300) to the pirates who, officers said, were from Indonesia.

Police did not identify the owners of the coal vessel. Johari said this was the second robbery involving pirates in Tioman waters this year. Most pirate attacks in the area happen in the Malacca Straits, off the west coast.

Malaysia’s military says the waterway was pirate-free last year because of joint maritime and air patrols with neighbours Indonesia and Singapore.

Half of the world’s oil shipments pass through the strategic Malacca Straits. Last month ship owners were urged to contribute to a fund to ensure safety in the international waterway.

According to the article, “Malaysia’s military says the waterway was pirate-free last year”, but that is not precisely true. If you look at the IMB Piracy Map 2007 at ICC Commercial Crime Services (a fine resource recommended to me by VH), you’ll notice that there were a handful of attacks and “boardings” in the Malacca Straits in 2007. 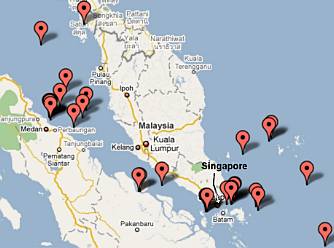 As you can see, piracy and maritime attacks were fairly widespread in the Malacca Strait, the Makassar Strait, the Java Sea, the Indian Ocean, with a few incidents even reaching the South China Sea, the Sulu Sea, and the Celebes Sea.

The IMB is a Google-based interactive map, so you can move around, zoom in and out, and click on the little red pointers to find out more about a particular incident. Pulling back to look at the entire region, you can see the devastation wrought by the Somali pirates clustered at the west end of the Indian Ocean and in the Gulf of Aden. 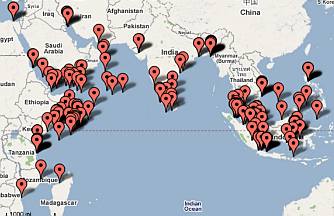 If you pull back even further, you’ll see a few incidents reported along the west coast of Africa, and another handful along the coast of South America and in the Caribbean. There was even a single incident reported in the UK during 2007. The incident report gives this information:

11.07.2007: 1650 LT: Liverpool, United Kingdom. The 2nd officer onboard a bulk carrier saw two men coming up the gangway, dressed as stevedores. When the duty officer asked to see their id, they replied that they did not have the ID but would go back and return with it. Due to prior police warning about thieves operating in the area and being suspicious, the local police were informed. The police caught one of the thieves who turned out to be on the wanted list of the police.

That’s it for Europe, and there’s nothing for the United States, Canada, Australia, New Zealand, China, Russia, or Japan. The pirate industry centers on the Indian Ocean, and runs along an axis that hugs the coastal zones from Djibouti to Jakarta.

There’s an obvious correlation between the incidence of piracy and the percentage of Muslims in the population of nearby countries. I’d be interested to see a statistical analysis and a regression graph: Muslim population vs. number of pirate attacks.

But the map tells the whole story. On land, the bloody borders of Islam are marked by rapes, murders, kidnappings, suicide bombings, and slavery. At sea they are marked by piracy.

5 thoughts on “The Dangerous Straits”