In most European countries it is a crime to deny the historical fact of a Nazi genocide against the Jews.

On the other hand, in Turkey it is a crime to assert that the events of 1915-1916 in Anatolia constitute an Ottoman genocide against the Armenians. 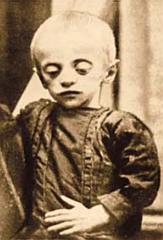 And now comes Russia. Holodomor is the Ukrainian term for the devastating famine in 1933 that killed millions of Ukrainians. Although billed as the time a “terrible humanitarian tragedy” by Stalin’s apologists, it has long been accepted by historians as a calculated strategy by the Soviet regime to break the back of Ukrainian national resistance.

Russia, however, isn’t buying it. Tuan Jim, who sent us the tip for this story, included this comment:

Here’s the article from Itar-Tass:

UNITED NATIONS, December 19 (Itar-Tass) — Russia blocked Ukraine-initiated UN resolution claiming Holodomor in the Soviet Union in early 1930s was famine-genocide aimed against Ukrainians, rather than a common tragedy of many nations in the country.

“We succeeded to block the inclusion of the item into the agenda of the current UN General Assembly,” Russian Ambassador to the United Nations Vitaly Churkin said on Thursday, adding the United States and Great Britain backed the Ukrainian motion, which “ended in nothing.”

Note that the Russian gas pipeline into the Europe seems to have paid off diplomatically. The Russians are convincing “explainers”:
– – – – – – – – –

Churkin said Russian representatives were active in explaining the history of Holodomor to foreign partners. As a result, nine EU countries did not sign the Ukrainian declaration, although “EU members usually act in a consolidated manner”, according to Churkin.

“An overwhelming majority supported the Russian position,” the ambassador said.

He described the Ukrainian initiative to portray Holodomor as genocide against Ukrainians as “an attempt to sow mistrust and hostility between the Russians and Ukrainians. We have a common past and the famine in the ‘30s hit not only Ukraine. Therefore, we (Russia) do not plan to apologize and call it genocide,” he said.

There is ample historical evidence to support the assertion that the Ukrainian famine was a deliberate act. It was the result of a calculated policy by the Politburo to destroy resistance to collectivization among the small landholders and the peasantry, and to force the entire rural population into the kolkhozy (the collective farms), where many of them starved to death.

The only argument against calling the Holodomor a genocide is the claim that it was directed at a class — the kulaks and other remaining “reactionary” landowners — and not an ethnic group. The fact that many people died of starvation in Kazakhstan and other SSRs, as well as in Russia proper, is adduced to support this thesis.

But the bulk of the victims were in the Ukraine. Ukrainian national resistance to collectivization was strong, and millions of Ukrainians died as a result of Stalin’s deliberate actions.

Call it what you will, the Holodomor was a man-made monstrosity whose scope matched and possibly exceeded the Holocaust of the Jews.

25 thoughts on “Russia Balks at the G-Word”