I’ve written previously about the proposed mosque in Gothenburg, Sweden. Last winter Dymphna reported that the site for the future mosque had been desecrated with pig heads.

Last week there was a repetition of the porcine vandalism. Our Swedish correspondent LN has kindly translated an article from Svenska Dagbladet about the incident: 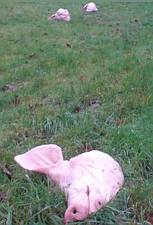 The mosque site at Ramberget in Gothenburg has been desecrated again. Someone has tossed several parts of pig heads on the site. Mohammad El-Altia, a director of the Foundation for the Mosque Construction, believes that this is only the beginning.

“What will happen when the mosque is completed?” he wonders.

It was 23-year-old Emil Janitzek who discovered pig parts on the property when he was on his way to school.

“I went past the spot about 9:30 in the morning and saw that there were split pig heads scattered all over the ground. I think it was four or five pieces,” he told SvD.se.

Emil Janitzek says there were also a pile of pig parts in the site.

“It appeared to be feet, among other things,” he said.

Mohammad El-Altia thinks that what happened is terrible. He said that Muslims are celebrating Eid Al Adha today, which is a sacrificial weekend.

“I think it is horrible that this is happening during our feast,” he said.

Mohammad El-Altia says that it is the second time that the mosque site has been violated.

According to Göteborgs-Posten someone had tossed two chopped pig heads on the site in February of this year.

“During that time we got a lot of support from people who live in the area,” says Mohammad El-Altia.

He says that this type of event shows that there is great ignorance about Islam, while he is concerned about what happened.

“I think this is just the beginning. What will happen when the mosque is completed?” he wonders.

Mohammad El-Altia says that the mosque is expected to be built in 2010.

Goran Larsson, Ph.D. in religion, also working as a researcher at Gothenburg University, says there are studies showing that many mosques in Sweden have experienced different types of violations and vandalism.

“This is a large dark area, and it is sometimes difficult to know what motives lie behind such things,” he said. Goran Larsson says that the protests against mosques tend to occur at an early stage and then die away when the building is completed. Johan Olsson, analyst at the Constitutional Unit of the Security Police, says that SAPO is following this type of event and assesses them in terms of the players behind them. Then one looks, among other things, at whether the perpetrators have any political beliefs which call for such acts and whether they have access to weapons.

7 thoughts on “Pig Heads at the Mosque Site, Yet Again”