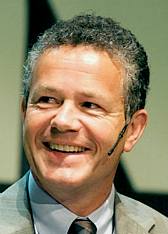 We’ve written numerous times about the plight of Frank Vanhecke, a politician for the Flemish separatist party Vlaams Belang and a member of the European Parliament.

His political opinions — against Multiculturalism and in favor of an independent Flanders — have drawn intense political persecution by the Belgian authorities. Mr. Vanhecke’s EU parliamentary immunity was recently revoked so that he could be prosecuted on a specious charge of “racism”.

Now comes word that the Belgian government has lodged a second racism complaint against Frank Vanhecke. Our Flemish correspondent VH has translated an article about it from the Vlaams Belang website:

It is still raining racism complaints for the Vlaams Belang in general, and Frank Vanhecke in particular. In past weeks we reported extensively on the racism complaint against Vanhecke because of an alleged breach of the Belgian racism law. Now that the parliamentary immunity of Frank Vanhecke has been lifted, the former chairman of Vlaams Belang is ordered to appear before the correctional court in Dendermonde, and risks losing his political rights if he is convicted.

Last week Frank Vanhecke was again questioned by the judicial police of Bruges. This time it is a complaint that was filed by a Belgian of Cameroon descent in reaction to an interview that the Member of European Parliament gave in November last year to a French TV station. In that interview Vanhecke claimed that the French imperialists on the Flemish periphery behave like colonialists did in the nineteenth century, that they refuse to respect the language of the Flemings and regard the Flemings the same way the Belgian colonists always looked at the petits nègres [literally: “little Negroes”].

It is peculiar that a full year after the interview a “racism complaint” is filed. The petitioner, Ndjoka Gaspard, is supported in his initiative by a dozen — mainly French-speaking — “anti-racist” organizations. It is also completely unclear what the racist element might have been in Vanhecke’s interview. To compare the situation of the Flemish periphery with those of the petits nègres is absolutely not a disrespectful remark, quite the contrary.

Ndjoka Gaspard and the French-speaking associations have clearly understood it in a different way, and declare that the “leader” of an “extremist party” in a “well-considered way deliberately tries to create or maintain stereotypes that are racist, humiliating and degrading towards Africans”. The Brussels court obviously takes the case very seriously, since the judicial police of Bruges have decided several times to press ahead with the questioning of the “leader of that extremist party”.

“Boy-oh-boy, does the Brussels court really not have any other concerns?,” says Frank Vanhecke in reaction. “According to the logic of Ndjoko Gaspard & Co., I will not be the only one standing before the court. The heirs and publishers of the British crime writer Agatha Christie, author of Ten Little Niggers, will then have to be in for it as well.”

Excellent comment by Vanhecke! Indeed, not only Christie — how about suing the director and actors of this?

There are more people hyperventilating when they hear of Ten Little “N-words”. La Shawn Barber explains why anti-racists don’t have to be frightened nor simulate nightmares after hearing the N-word:

[…] Christie was a product of her times. When she chose the title Ten Little Niggers, the term nigger was in common usage, at least in the U.S. In due time, the title was changed [the Brits stuck with the original title until the 1980s]. That doesn’t make it any less offensive, but the book’s original title doesn’t detract from the intricately plotted story she wove together. The book itself isn’t racist in the least. I’d recommend her books to anyone who wants to enjoy a good, old-fashioned, “cozy” English murder mystery.”

The very concepts of dialogue, discussion, and debate have deteriorated in this country, thanks to that odious practice called political correctness, let alone actually engaging in these things. It saddens me that individuals and institutions prostrate themselves before the PC god, deathly afraid of appearing insensitive at best or racist at worst.

The title was first changed to “Ten Little Indians”. Belgian Indians might have sued the publisher for that, but they didn’t. Not even after the final worrying title change: “And Then There Were None.”

Maybe then we should ask those “anti-racists” in court, “Who builds igloos?”. When they answer it correctly… sue ’em back!