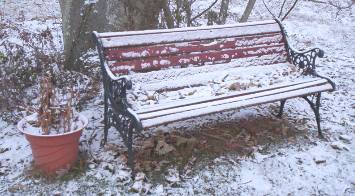 We had our first snowfall for the season last night. It was light, thin and powdery, not anything a real snow person would deign to notice. But here at Schloss Bodissey the falling snow, especially as it continued for a while into the evening, seemed to light up the outside world. And to have it fall on St. Nicholas’ feast day was even better: it underlined the Advent season and the coming of Christmas.

No doubt the local shopkeepers are the happiest of all. There is nothing like a light dusting of snow on the weekend to make people leave their houses and begin (or, more likely, continue) their holiday shopping.

I love that red bench in all its seasons. The first time I saw it was in the spring. I was in town, stealing raspberry canes from my favorite place — a spot beside a creek which runs down a piece of city property that eventually opens onto a softball field. That location has an abundance of canes, though both fruit and stalks mostly go to waste since no one walks there.

These red raspberries are particularly wonderful. I’d picked the fruit several years before, but this time I was determined to get some of the canes to plant at home. As I was digging — trying to look casual and hoping the local authorities wouldn’t come along to inquire into my activities — I happened to glance up at the “antiques” store across the street. That’s when I saw the bench sitting out front. From that distance it appeared to be the Platonic ideal of a bench; it drew me from my thieving for a closer look.

As I came nearer it was obvious that this ideal had a bit of age. The slats were Chinese red, but the paint was peeling and the wood beneath looked worn. The boards weren’t rotted exactly, but certainly they’d been weather-exposed and were none the better for the experience. Still, those wrought iron arms were lovely, even though I could tell that in a few years the curved slats would become unsittable.

Being a “I’ll-worry-about-that-later” type, I went inside to inquire about the price. I like this shop; it’s a jumble of items with no seemingly logical pricing system. Which is okay by me because the cost of the bench was within my means. I could hear the shadow of my daughter’s voice, taking me to task for not haggling about the price (“Look at those slats, they’re in awful shape! Speak up, Mom! You’re such a wuss,” she scolded. I ignored her). One of her favorite games in life had been dickering over prices. While I enjoyed being the beneficiary of her gift in that department, it’s not my style. So I paid the asking price, promised to arrange for someone to pick it up, and went back to stealing my raspberry canes.

One of my sons has a van (don’t all musicians?) so he agreed to pick up my treasure and convey it out here to the Edge of Beyond. As it turned out, Mother’s Day was around the corner so we decided that was the best time for delivery. 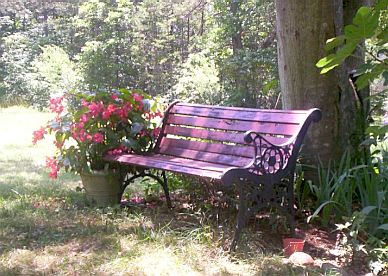 Thus did the only slightly-less-than-Platonic red bench come to rest under our spreading mimosa tree, where it has enjoyed each season as it comes…and goes…
– – – – – – – – –
The mimosa under which the bench sits is itself surely one of God’s miracles — i.e., a beautiful, stupendous mixed blessing. Mimosa trees are sometimes classified as shrubs. Around here they are a weed tree, though we didn’t know that when we moved here. Back then, ’twas but an innocent tad growing next to some fig bushes. And then it developed into an attractive adolescent, with fragrant peach-colored blossoms.

As the years went by it spread massively; its progeny sprouted in improbable abundance everywhere. In May, thousands of seedlings come up in thick masses all thru the flower beds. If one is diligent and early, getting rid of them is no problem…it’s the “early” part I find hard. That, and the fact that they continue to sprout all summer, each time you dig even a little in the soil or the compost. Plus they hide among the perennials, disguising themselves as benign companions.

Yeah, we “ought” to cut down The Giantess, but there are karmic consequences attendant upon destroying such magnificent loveliness. I’m afraid she must simply be permitted to expire in her own good time. Having already survived far past her span (on average, fifteen or twenty years), the karma would be serious indeed were we to vanquish an ancient beauty simply because she is profoundly promiscuous and inconvenient.

As many of you know, the title to this post is taken from one of Shakespeare’s most often quoted sonnets. This one has a special meaning for me because it was the one in which I actually learned how to read a sonnet, whether to oneself or out loud. Up until I learned how to read these poems, I didn’t like sonnets. It was a case of ignorance — plenty of exposure to the arts but never a good teacher until I got to college.

Dr. Harris taught an Aesthetics class. Not only did I learn how to read a sonnet, but he taught us to hear the difference between Debussy and Ravel. The man was one of those people who fall into the category that the Baron calls “good all the way down”. When students came whining about their overdue papers he listened with calm benignity and then invited them to give him a date on which they’d like to submit their work. The effect on the student was always the same: a jaw-dropping disbelief. Where was the lecture, the admonitions about planning one’s time better? Where was the grief?

Not surprisingly, this quality made his students more responsive. These were mostly first-generation college kids whose parents worked in blue collar jobs. Their exposure to people like Dr. Harris had been limited, maybe even non-existent. To give you an idea of his modesty, the man had written an excellent text on aesthetics himself, but he used someone else’s. I just happened to run across his version in the college library and when I asked him why we weren’t using his text, he shrugged and said the one he chose for our class was better. Silly sophomore that I was, I didn’t steal that book; I wish I had it in my possession now.

Here is the full version of the sonnet. Following that, I will show you how he taught us to read it, thus changing our view of the difficulty of sonnets:

That time of year thou mayst in me behold
When yellow leaves, or none, or few, do hang
Upon those boughs which shake against the cold,
Bare ruined choirs, where late the sweet birds sang.
In me thou see’st the twilight of such day
As after sunset fadeth in the west;
Which by and by black night doth take away,
Death’s second self, that seals up all in rest.
In me thou see’st the glowing of such fire,
That on the ashes of his youth doth lie,
As the death-bed, whereon it must expire,
Consumed with that which it was nourish’d by.
This thou perceiv’st, which makes thy love more strong,
To love that well, which thou must leave ere long.

According to Dr. Harris, these poems were never meant to be read by coming to a dead stop at the end of each line. Instead, you searched for the breathing spaces. Thus, Sonnet 73 is recited (if I recall correctly) this way:

That time of year thou mayst in me behold [breath] when yellow leaves, or none [breath], or few, do hang upon those boughs which shake against the cold, bare ruined choirs [breath] where late the sweet birds sang.[full stop]

When I heard him read it like this, I “got” it. So that’s what sonnets were! I sat there stunned…

Here is a page on Shakespeare’s sonnets. This particluar link has a painting by Constable to accompany Sonnet 73. The angle of the composition is startling but it works, and it certainly suits the complex mood of the poem.

Whoever assembled the sonnets this way is obviously quite knowledgeable. Of Sonnet 73 they say:

The sonnet is the third in the group of four which reflect on the onset of age. It seems that it is influenced partly by lines from Ovid’s Metamorphoses, in the translation by William Golding. However the verbal parallels are somewhat sparse. Shakespeare’s presentation is much more individualistic and cannot easily be attributed to any one mould or influence…

..the group of four sonnets, of which this is the third, begins with a putative skirmish with death and finality, so that it is in a sense merely thematic within that group to discuss the autumn of one’s years, which will shortly lead to parting and separation. We can therefore allow that it uses some poetic licence in painting a gloomy portrayal of the withered tree…

There is much, much more information at that link about the sonnets.

So much to know, so little time.