We received an email this morning from a reader in Albania. With his permission, I’m posting it below:

Let me introduce myself:

I’m “Albkrist” from Albania, 28 years old, Catholic descendant. I have been a reader of your site Gates of Vienna. I congratulate you for the great work on supporting our Christian identity.

One thing to clarify with you, then afterwards you can verify it.

We Albanians have had a bad presentation in Europe. Europe identifies us as an Muslim nation! This is not true. This label is given to us by Serbian and Greek propaganda, and because we are a small uninfluential voice in Europe.

Myself, I am Catholic and hate Islam, and anything that has to do with it. I’d rather fight against this threat to Europe. I consider myself a European citizen. 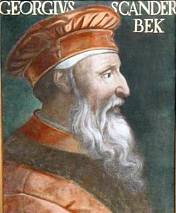 I just want to clarify that the majority in Albania, more than 90%, are pro-European. We lived under the Turks for more than 600 years and thus these damn invaders left their sign on this nation. But now that they are gone all of Albania wants to turn its face toward Europe. We are ashamed of being converted to Islam and now everybody (the majority, and after some decades all of Albanians) wants to turn the page.

Albania is the motherland of all of them so now or later they will be with us or against us.

The two most well-known personalities of Albania are both Catholics:

Skanderbeg protected Europe from the Ottoman threat; just read about it if you don’t know.

Check this site financed by Austrian Foundations: Official Website of the Commune of Kelmend, North Albania.

This zone has 100% Catholic descendants; they never submitted to Islam even after 600 years..

What I intended with this letter is to say that Skanderbeg the protector of Christianity is not mentioned in your site.

I think that he deserves this.

Hope to see his contribution to Christianity in your site.

I’m glad that Albkrist brought this matter to our attention, and I hope that his email will help repair our lack of information about Albania’s Christians.

If any other Albanians want to supply additional material, please feel free to leave it in the comments.

23 thoughts on “The Other Albania”