The most intense conflict between Hindus and Muslims in India has been ongoing in Kashmir since Partition and 1947, and has been particularly intense since the Indo-Pakistani War of 1965. Even though Jammu and Kashmir were allocated to India in 1947, the province is effectively divided between India and Pakistan, with China holding onto a small section in the northeast.

The following article was kindly sent to Gates of Vienna by the Indian journalist Shabir Ibn Yusuf. Mr. Yusuf’s report describes the mounting psychological damage experienced by the residents of Jammu and Kashmir after six decades of continuous conflict.

SRINAGAR, Nov 21: A recent study that looked at the psychological health of the population of Jammu and Kashmir has found that a third of the study participants had contemplated suicide, a sign of extreme psychological distress.

Two decades of conflict in Jammu and Kashmir between the army and what the organization said are Kashmiri militants seeking end to Indian rule in the state has resulted in at least 100,000 deaths and 20,000 displaced persons. However, the organization, quoting records available from police and government agencies suggest that 20,000 deaths and 4,000 displaced in last two decades. 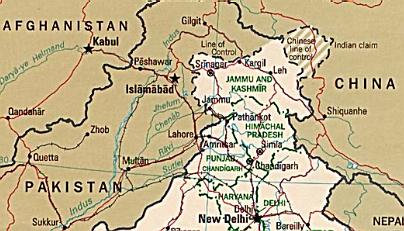 The study, published in the latest issue of peer reviewed journal “Conflict and Health”, was conducted by organization Medicines Sans Frontiers (MSF), Simon Fraser University of Canada, and Utrecht University of Netherlands.

The survey was conducted in 2005 and includes 270 males and 240 females. The most striking finding of the study is that one-third of those surveyed had thought about ending their life in the past 30 days of the survey. The survey found that there was a difference in the reasons of psychological distress between males and females. Males who had self-experienced events, i.e. if they had been arrested, tortured, or abused, show higher level of distress. Kashmiri women, on the other hand displayed psychological problem by just witnessing the events.

In the paper the authors explain that “for males, violation of modesty, forced displacement, and disability were all associated with a significantly increased likelihood (three times the odds) of suffering from psychological distress. For women, the witnessing of people being killed or tortured or dependency on outside assistance doubled the odds of suffering psychological distress.”

The data tabulated in the paper is very shocking when you consider that 63% of the respondents have seen wounded people. 40% have witnessed people being killed, 67% have seen others being tortured and 13% have witnessed rape.

44% of the respondents experienced being abused and 11% claimed that their modesty was violated.

Though one-third reported having suicidal thoughts, it does not always result in a suicide attempt. But according to one estimate about 60,000 Kashmiris did commit suicide last year.

Withdrawing themselves or isolating themselves was the most preferred way of coping with the psychological problem. About half of them showed aggressive behavior. Many turned to religion as a source of support and finding peace.

Even though Kashmir lacks proper mental health care facilities, still, over 60% of the respondents visited the health clinic to seek help. Some visited more than once in the 30 days immediately before the study interview, and women were found to be visiting health facilities more than men.

The impact of violence, threat, and alertness has adversely affected the armed forces too. The elevated level of psychological problems is seen among Army personnel deployed in Jammu and Kashmir. This past January, the army hired 400 psychiatrists to help control the high numbers of suicides in its ranks.

The study has recommended that government should spend more money in improving mental health care facilities for the people and the soldiers. Those fighting this battle for Kashmir should stop and see what this battle for land is doing to the people living on this land.

One thought on “Shell-Shocked in Kashmir”