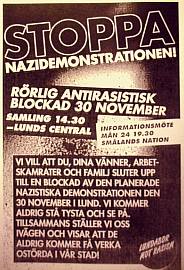 Word has just arrived from Sweden about a counter-demonstration that is planned for Sunday November 30th — the anniversary of King Karl XII’s death — which is intended to block a demonstration by Swedish nationalists in the city of Lund.

It’s important to remember that in Sweden all forms of nationalism are conflated with Nazism, so that elite opinion consigns the Sweden Democrats (Sverigedemokraterna) to the same basket as the real Nazis and all the other nationalists and non-Socialists.

I have no idea which of these groups will be present in Lund on Sunday — you can’t tell the players without a scorecard, and I don’t have one — but here’s the translation of a flyer that has been distributed to residents of Lund. It presumably originated with AFA (Antifascistisk Aktion, or Antifa) and its affiliates, the folks who intend to oppose all those Nazis on Sunday:

We want you and your friends, working comrades, and family to join us in a blockade of the planned Nazi demonstration the 30th of November in Lund. We will never stand silently and just look. United we will block their way, showing them that they will never operate freely in our city.

Here’s a photo of the site of the expected confrontation: 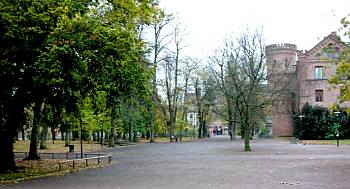 Antiracists are going to try to prevent the nationalists from entering the Lund Centrum on Sunday. The 30-Nov association’s chairman Lars Hulthén is going to speak, but says he does not really know to whom he is going to speak.

LUND. Because of the nationalists have sought a demonstration permit in Lund on November 30, the Organization “Lund citizens against racism” last night held a briefing at Småland’s Student Club. Fifty people attended to hear about the plans for a counter-demonstration.

“The goal is to get several hundred people who stand in the way of the Nazis so that the police will have to bus them away. They will not be able to enter the Lund Centrum,” said the meeting chairman Malin, who did not want to disclose her last name.

On the site nordisk.nu, a gathering place for Nazis, nationalists and right-wing extremists, advice is given on how the blockade should be avoided. Nationalists are invited to come to Lund ahead of time on Saturday, or attempt to travel there by car and seek police protection if there are counter-demonstrators nearby.

It is unclear exactly which organizations are supporting the demonstration. According to “Lund Citizens against racism”, it is the “Free Nationalists of Scania” that was formed by members of the Nazi organizations “Activism Öresund” and “Helsingborg Campaign”. The call for the demonstration it is by the “nationalistic”. Kristoffer Dahlström, who applied for a demonstration permit; he has a background in the “National Democrats”.

A Swedish reader supplies some background on Karl II and the November 30th celebrations:

The Karl XII celebration in Lund has a long history. The celebration of his death was held annually (with some interruptions) on November 30 from 1853 until 1991.

Karl XII has a special place among Swedish kings with regard to his relationship with the city of Lund; namely, the king resided in the city during 1716-18, which actually made it to the capital of Sweden during these years.

In 1853 the future professor of aesthetics Gustaf Ljunggren, then chairman of the Academic Society’s social committee and a general driving force in the student world, proposed that the memory of Karl XII’s death should be celebrated in Lund.

The proposal was adopted and during the 1800s, and it was celebrated with ‘fine’ speeches at the Academic Society and then students marched in torchlight down to the Cathedral School, singing “Viken, tidens flyktiga minnen” by Geijer and the poem “Karl XII” (“Kung Carl den unga hjälte” = King Carolus the young hero) by Esaias Tegner.

Among the ceremonial speakers you can find that century’s prominent names, such as Albert Lysander and Martin Weibull.

Eventually it was decided that the procession should be held only if at least 150 student union members had declared their intention to participate. Although the total student number at this time amounted to only about 600 (today up to 10,000!), the minimum was always reached. Also, from 1873 the city of Lund’s non-academic citizens were invited to participate in the procession.

The torchlight procession continued through the years with a break around the First World War, but then the Student Union took exception and did not want to participate.

The “30-November Association” consisted of national and right-wing groups at the University.

During the 1970s counterdemonstrations started to take off.

At the end of the 1980s a growing number of neo-Nazi elements, Heil Hitler greetings, swastikas and anti-Semitic slogans were introduced. Skinheads formed an increasing part of the small torch-procession, and there was a huge police presence with blockade-containers, helicopters, road-blockings of Lundagård and an almost military presence. Lund resembled a city under siege at that time.

On Nov 30 1991, in connection with the neo-Nazi offensive in Sweden, a broad anti-racism coalition decided to stop the march. There was a big blockade on the Big Southstreet to hinder the torch-procession, and barricades all over the central city and “traveling BZ” (AFA scum-of-the-earth) activists from Denmark. Central Lund was a battlefield!

The police gave in and the torch-procession was stopped.

This was effectively the end the Karl XII celebrations

Since then, no disturbances have been reported.

For those who want to delve into even more detail, here’s additional information from Anna-Lena Lodenius on her blog:

Reawakening of the 30th of November in Lund

In recent years there has been calm in Lund on November 30, Karl XII’s death-day. Which many surely have been grateful for, remembering the annual riots on this date in the early 1990s. But now the Free Nationalists of Scania are planning to shake life into the celebration again. I note that the Liberal Nationalists had invited Marc Abramsson, leader of the National Democrats, as a speaker at the meeting launching the event.

The National Democrats take another step closer to the national movement, says Robert Boström, a Sweden Democrat in Örebro, on his blog. ND has also been a longtime participant in the annual Salem Demonstration alongside, among others, “Info14” and the Swedish Resistance Movement. Now all that is missing is that they also turn up at the People’s March in conjunction with the National Day, writes Boström. Free Nationalists Scania is part of the nationwide network of Free Nationalists. The Skåne branch of this network was formed in early November (see ‘Info 14’).

The November 30 celebration this year is supposed to be the biggest since the early 1990’s when the tradition petered out much because of the fracas with Danish BZ and other activists who sabotaged the parades. The return to tradition was apparently supposed to be accompanied by Lars Hulthén, an old celebrity in this context who used to waltz around in the media in his capacity of chairman for 30 November Association of Lund… Despite repeated questions, Hulthén could never point out any single major characteristic of Karl XII, except that he lived in Lund, which he happened to do during the short span of years 1715-1718, which may not be the first thing people think of when they hear of Karl XII.

There are a lot of things you can say about Karl XII. Something I never understood is why nationalists celebrate the ruler responsible for the collapse of the giant Swedish empire. On the other hand, celebrating the fact of his death — does anyone even know when his birthday was?

Stay tuned. We’ll see what happens in Lund on Sunday.

15 thoughts on “Lund Anti-Racists Plan to Stop the Nazis”