It’s the weekend, and that gives us the excuse to veer off-topic for a little while and take a look at Joran van der Sloot. If you followed the Natalee Holloway case, you’ll remember that Mr. van der Sloot was a prime suspect in her disappearance back in 2005 on the island of Aruba.

Now Joran van der Sloot is back in hot water again, this time in Thailand. Our expatriate Dutch correspondent H. Numan has translated a couple of Dutch-language news articles, and follows them with his own commentary. First, from De Telegraaf: 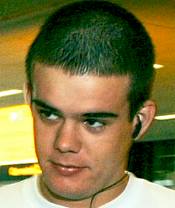 AMSTERDAM — Joran van der Sloot fell for it again! For the second time, now in Thailand, he fell for an undercover operation. In this operation it is documented how he specialized in the sale of young women.

The suspect in the case of Natalee Holloway offers Thai women for sale in Bangkok to the Dutch pro market. He delivers girls for €10,000 each, who can work ‘for a mere $300 monthly’ in local bordellos, he said. The undercover operation is again the work of the Peter R de Vries team, and lasted for several weeks. An undercover operator pretended to be a Dutch pimp and worked Joran in a trap. Joran fell for it, big time.

Yesterday De Vries showed exclusive for the Telegraaf the raw shocking undercover images, who will be broadcast coming Sunday. In it Joran is visible in a hotel room, with two Thai prostitutes present, explaining his business. The new trap was set after De Vries earlier showed to seven million viewers Joran’s confession. This was broadcast all over the world. In a specially rigged Range Rover Joran admitted he took the American girl who disappeared to sea and dumped her. During conversations in the hotel room he said he can deliver women on a weekly basis. Visa and passports are not a problem, so he claims. “I’ll arrange it, don’t worry about it!” The girls think they will attend dance classes, but will actually be forced to work six days per week in bordellos.

De Vries: “The tapes show how little respect this 21-year-old has for the lives of others. The fact that after the disappearance of Natalee he went into selling women shows his character in a nutshell.” According to De Vries, Joran is guilty of a very serious crime. “Preparing to smuggle humans is a criminal offense. This can land him into major trouble in Thailand.”

The operation was running until yesterday afternoon. While Joran van der Sloot thought he was chatting on the Internet with his business partner, he was chatting with De Vries. Naively Joran blabbered that he was keeping a low profile for the moment until the announced broadcast (relating the Natalee Holloway case) about him was past. After that, he would be into business. About Natalee he didn’t fear anything. “They can’t find a thing.” Also he informed his business partner he would set a Thai killer on De Vries, to solve his problem. “I don’t care what it costs,” he said. On the tapes one can see that Joran lives in a big mansion in Bangkok.

The lawyer for Joran, Mr. Bert de Rooij, refrained from commenting on the latest accusations, as he hadn’t seen the program yet. “I will wait until after the program has been broadcast.”

He claimed he never really wanted to supply women, and said it was sheer bluffing. “I didn’t do it! I just said something.” he told reporters. Joran responded exactly the same way when he discovered his confession about the death of Natalee Holloway was taped. “I see this as a reflex” said De Vries. “In conversations with our informer and over the Internet he was crystal clear about everything”

Do you remember Joran van der Sloot? The man who — in all likelihood — killed Natalee Holloway? His father was a big shot on the islands, and arranged matters. Joran appeared to get away scot-free. Not quite, though. A very good investigative reporter, Peter R. de Vries, did much better than the Dutch police and was able to get a full confession out of Joran. This was major news in both the Netherlands and America. Peter de Vries got an Emmy award out of it.

Sadly enough, Joran disappeared and escaped Dutch justice. Having a daddy who was going to be a judge and knows the ins and outs of the legal system does help. Joran fled to Thailand. Where he is right now. One might think Joran at least learned to keep a low profile until the whole affair quietly went away. Not at all. Joran found a new hobby: he is in business now. Smuggling women for prostitution, that is.

Once again Peter de Vries was the man who uncovered his new activities. And once again he trapped Joran into making a full confession. Hopefully this time he won’t be as lucky as he was before. Normally the Thai authorities take a very dim view of foreigners who blacken the name of the country, and most certainly when these people are into trafficking women. Daddy can pull some strings in the Netherlands, but I very much doubt if Daddy can save his darling son this time. At best and for a gigantic bribe, he might be able to enable his lovable son to flee to another country.

Only where can he hide now? America? Holland? Cambodia? North Korea?