The spirit is willing, but the darn flesh is currently running a temperature of 102.7°F (39.3°C). So I’m woozy without the booze. Bummer. How annoying to be sick when there is so much to do.

This photo of Sarah Palin has been in my hot (literally) little hand for a week now, awaiting a time when I felt buoyant enough to post her image here.

I’m too sick, so I can’t do this by myself. The Baron (who worked on my previous post while I lay on the floor, dictating my ideas) has stepped into the breach once again. Hmm, Dictating has got to be one of my favorite activities. 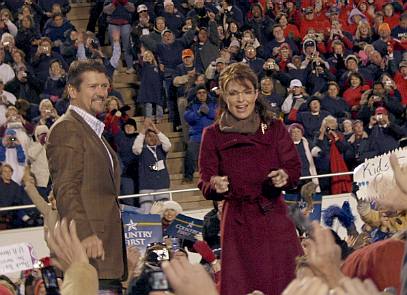 At any rate, here is the story behind this photo of Sarah Palin, taken last weekend at a rally in Salem, Virginia.

Salem is not far from Virginia Tech, where we went to see the future Baron and look at his labs, his office, his apartment, and a small part of Virginia Tech’s botanical gardens (they have a tree called trifoliate orange. It appears to be semi-tropical, so I wonder how it survives the climate of Southwestern Virginia).

We also went to a Eucharist at his church, built in 1858. They used the Rite I liturgy. Great music for those of us who no longer have the organ-playing of the future Baron at our church.

The rector announced a need for someone to play the piano at an afternoon event. So of course I volunteered the fB’s services for this occasion. I’m sure he will forgive me… eventually.

On the way home we drove briefly along the interstate, perhaps three minutes all told. During that time we were passed by several enormous eighteen-wheelers hauling sound equipment, scaffolding, stage platforms, etc. We were puzzled as to their purpose. After all, summer is over, as are all the numerous local music festivals. What function were those sound trucks to serve? Was the equipment being mothballed for the winter?

Those three or four trucks passed us by, heading for Salem, and then we promptly forgot about them.
– – – – – – – – –
Then on Monday morning it all became clear. Miz Sarah and her consort had appeared in Salem, in addition to showing up at several other Virginia venues. Originally this event was scheduled to be held inside, but as the crowd grew, the attendees were moved out-of-doors in order to accommodate the increase in numbers. Fortunately, the rains had passed, so there was glorious autumn weather for her stump speech.

We knew nothing about this appearance. That was fortunate, since I would have attempted to go, and I haven’t the stamina to do the things I want to do. As the Baron reminds me frequently, I can’t do every good thing that I think of. On occasion the Baron has threatened to write this on my forehead in mirror script so that I can be periodically reminded of my limits. However, not being able to do these wonderful things can sometimes turn me green with envy.

Our friend, a talented and intelligent photographer, sent a link to his Palin photos. The one you see here is the one I chose.

Our guy stood for hours in the cold, patiently waiting for Governor Palin’s appearance. Unfortunately, politicians on the stump are never in charge of their time. They’re always being delayed by one thing or another, so it took some stamina on our friend’s part to await her arrival.

I don’t remember if he told me what she said. Not that it mattered. Governor Palin’s simplicity works a magic even her enemies can’t deny.

Who knows what’s in store for tomorrow? I’m not willing to guess anymore: Americans are a wily bunch.

But even in defeat, her star will continue to ascend. She is too astute to be eclipsed after this.

My dream team is Sarah Palin and Bobby Jindal, two governors who can shake the socialist fundaments of our commonweal. They already have credibility in their respective states. Anyone want a moose call?

By the way, I hope that Governor Palin is encouraged to keep the clothing they gave her. Anything less would be a tacky lack of generosity on the part of the Republican National Committee.

In my fevered state, I have composed some doggerel for Sarah Palin.

Here’s to Governor Palin:
May she come quickly sailin’
Back to take the helm
Of this American realm
And tack our ship of state
Steadily starboard.

I have an excuse for this rendition:
’Tis my febrile condition.
What’s yours?