The following material is drawn from articles on the websites for Sveriges Television (SVT, Swedish state television) and Kvällstidningen Expressen. The translation is a joint effort by our Swedish correspondent LN and a Swedish reader who comments here occasionally as “Derailed Cluetrain”, and who is a regular contributor at Falkblick.

Derailed Cluetrain gives us some background on the principal figure in this controversy: 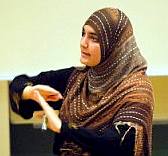 Cherin Awad is a “professional Muslim” who has made a career out of representing her faith in Swedish media and establishment venues, with a resumé that includes writing for Svenska Dagbladet (national Swedish daily), the “Ramadan blog”, holding lectures about multiculturalism and Muslims for police students at the Växsjö University and the Swedish state department, frequent appearances as a guest on Swedish talk shows, and now finally as a host for the SVT (Swedish Television, the national broadcaster) program “Halal-TV”.

Since this issue became public after bloggers raised it, SVT has removed from their web site the program description text described in the translation below, without any explanation of why they chose to do so. It should be noted that Ms. Awad was 19 years old, a law student, and already a well-established talking head representing the Muslim population in Sweden at the time, which makes the efforts by her defenders to portray her statement as “youthful exuberance” dubious at best.

And LN summarizes the “Ramadan Blog”:

A diary of three young Muslims writing a lot of uninteresting stuff under captions like these:

Now for the translation from Expressen:

Recants her opinion on death penalty

One of the participants in a new venture called “Halal-TV” on Swedish Television (SVT) show, has said that it is right for women who have been unfaithful to be stoned to death.

Three weeks before the start of the series, Cherin Awad is backing away from her statement.

“It’s regrettable that I expressed myself in that way,” she tells Expressen.

In November, SVT starts broadcasting the program “Halal-TV”, in which three Muslim women give their perspectives on Sweden. One of them is Cherin Awad, a lawyer, lecturer and writer on the “Ramadan blog” of Svenska Dagbladet.

“She is one of three leading ladies. There is no host, just three women doing a travelogue on their country,” says Gunnar Hofverberg, the project leader for “Halal-TV”.

In December 2003, Cherin Awad appeared on SVT’s program “Existens”, which deals with lifestyles and social issues, that particular show being dedicated to an unmarried women in Nigeria who risked being stoned to death because she gave birth to a child.

After the feature a studio debate followed, in which the host asked Cherin Awad if she thought it was right to stone an unfaithful woman.

She replied that it was “virtually impossible” to be sentenced to stoning, because juridically it requires so much evidence for such a penalty to be imposed. Such evidence must be that the woman confesses, or that there are four witnesses to the infidelity.

But she did not answer the question about whether the punishment is right or wrong.

“The penalties are harsh, because God shows us human beings that it is incredibly appalling to behave in such a way,” said Cherin Awad.

The host followed up with another question:

“But if the criteria are met, if you have four witnesses, if a woman or a man confesses to adultery, according to you, would it (stoning to death) be the correct punishment?

SVT’s own description on the program schedule, which SVT recently removed from its website, described her position:

“According to her, the evidence requirements are so strict that the sentence can never be applied in practice. But if she has to choose, God’s law always precedes man’s law. And the penalty for adultery is death.”

But according to Gunnar Hofverberg, the schedule text is unfair.

When Expressen contacted Cherin Awad, she said she regrets her statement, explaining that she felt pressured by the situation.