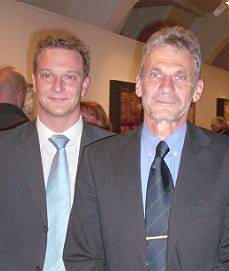 I met Bart Debie (at left in the photo, with Luk Van Nieuwenhuysen) this time last year in Antwerp and Brussels. He was one of numerous friendly and helpful members of Vlaams Belang who accompanied the attendees of the Counterjihad Brussels conference and made sure that our facilities and victualling were smoothly taken care of. You’ll never meet a more personable and outgoing fellow.

After a long legal struggle, Bart is about to begin a year-long prison sentence for the crime of “racism”. Diana West has this report:

“Funny enough, one does get used to the news.”

That’s what Bart Debie told me on confirming that, yes, he has been ordered to report to a Belgian prison on Wednesday—tomorrow—to begin serving a one-year term for “racism.”

Let me explain the ghastly surrealism of this sentence as meted out to this former police officer and former Antwerp City Council Member by the Belgian state: Debie neither made the racist remarks at issue, nor was he even present during the incident. This only adds horrific dashes of Kafka and Koestler to a politically correct prosecution of a member of the political opposition by what may be best described as fascistic little Belgium. Of course, expressing incredulity over Debie’s utter innocence of “racism” is not to admit to the legitimacy of such “racism” prosecutions. Any such prosecutorial curb on speech is a gross violation of freedom of speech; but there is a doubly unjust and even absurd aspect to this case given Debie’s non-involvement. Hence the Kafka- and Koestler-esque touches.

But there’s also a touch of Dumas to the story. This struck me when I first listened to Debie tell his tale last summer during a visit to Antwerp, a city of about 500,000 people including some 40,000 illegal aliens mainly from Turkey and Morocco.

Once upon a time, Debie, a clean-cut and athletic-looking man of 34, was a senior police officer. When I met him, he was on the city council, but at age 25, he was the youngest police superintendent in the country who would later be nationally celebrated for leading successful police campaigns against mafia-run prostitution, human trafficking and illegal drugs organizations in Antwerp. Then came a night in 2003, after which things get both complicated and nightmarish.

I am still trying to master the facts of this five-year-plus case, but here’s how I understand the salient points: While responding to complaints about a pair of drunks, Debie and his policemen were attacked by five Turkish men wielding a baseball bat and a knife. Two witnesses testified to this attack in court. After helping to subdue and arrest the attackers, Debie was called away to supervise a SWAT team elsewhere in Antwerp, and his men returned to the station with the Turkish prisoners, who later claimed they had been beaten and subjected to racism while at the station. Debie believes the beating did indeed occur in his absence, although his ultimate conviction was for creating, as he explains it, “an atmosphere which led other people to say such things” as—get this—”Now we have five lambs here and we can slaughter them.”

Initially, Debie was given a suspended sentence in what turned out to be the first of two trials. “I was very happy with the first sentence,” Debie recalled. The policeman who admitted to making the “racist” comments went unpunished and now serves, Debie told me, on a “team for managing diversity in Antwerp.” Meanwhile, the Turks were never charged for their assault on police.

Read the rest at Diana West’s blog. She recommends contacting the Belgian embassy to express your concerns. Here’s the information for the USA:

Using the catch-all of “racism”, political speech is being criminalized throughout most of Europe. And don’t think for a moment that the United States is immune: once the Apostle of Hope and Change is installed in power, we will begin our own journey down the same road.

I’m certain that readers who attended Counterjihad Brussels 2007 remember Bart’s smiling face. Please keep him in your thoughts and prayers during the difficult times ahead.