From a would-be participant in Pro-Köln from the UK:

Back late last night. The event (both days) was chaotic. Obviously someone in the police department had leaked all our programme as we were blocked at every step. I tried to accompany B. [an Italian] to the Friday private meeting, but we were blocked by loonies, and the police, instead of protecting us, sent us all away. B., as you can imagine, was furious! The same thing happened in the evening when we all tried to meet up again for dinner. The proprietor of one establishment, a bierkeller on the banks of the Rhine, threw us all out when he realized who we were. B. was a star. Asked him if his name was Adolf and then stood up on a wall outside the restaurant and gave an impromptu, rousing speech to all the assembled Germans to great effect.

From a member of Vlaams Belang: 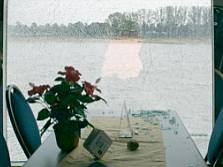 I was stuck at the train station of the airport of Bonn-Köln with approximately 400 supporters of Pro Köln (about half of them Flemish). Filip Dewinter was there, Andreas Mölzer (MEP for the Austrian FPÖ) and Henry Nitsche (German member of Parliament, ex CDU). The police made us wait three hours before announcing the banning of the meeting. All in all, I was relieved they didn’t put us on a train to the main station, because it would have been a slaughtering.

There was an improvised press conference in one of the halls of the airport, and Markus Beisicht (Pro Köln), Dewinter, Mölze and Nitsche spoke to their supporters.

Filip Dewinter (front center; I don’t know who else is pictured here) in front of a banner sponsored by the blog Politically Incorrect: 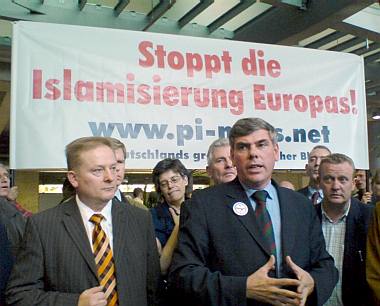 Update: a Belgian reader supplies the names of the other people in the above photo:

At the left in the picture with Dewinter is Henry Nitzsche, member of the German Parliament, former Christian Democrat, now independent

Behind Nitzsche (barely visible) is Philip Claeys, VB MEP. Black-haired woman between Nitzsche and Dewinter is Hilde Delobel, member of the Flemish Parliament (VB). Next to her, behind Dewinter is Andreas Molzer, Austrian MEP.

Folks from Politically Incorrect with another banner: 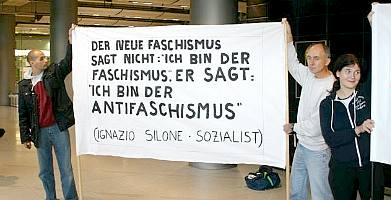 Translation: The new fascism does not say: “I am fascism.” It says: “I am anti-fascism.” (Ignazio Silone — Socialist)

8 thoughts on “More Reports from Cologne”