I have written before about the Indo-European languages, a fascinating window into European and Eurasian prehistory. Proto-Indo-European almost certainly existed as a living language by 3500 BC because it contains words related to wheeled vehicles, which were invented at about this time. The IE expansion began, most likely from the Black Sea region of Southeastern Europe, shortly after this. The PIE language soon started breaking up and was almost certainly dead by 2500 BC, at which point the beginnings of the various IE branches slowly began to emerge. The IE expansion had not yet reached far western, southern or northern Europe at this point. For instance, the people who built Stonehenge in England did not speak an Indo-European language. The Iron Age Celts appeared in the British Isles after Stonehenge had been completed.

There are no written records of the Proto-Indo-European language itself. It was spoken in the fourth millennium BC, when only Sumerian and eventually Egyptian existed as written languages. The first written records of Indo-European languages are of Hittite and Linear B (ancient Greek) from the second millennium BC, at which point PIE had definitely been dead for many centuries. But since comparative linguistics as a science has become quite sophisticated, we can reconstruct, through the later attested Indo-European languages, much of the vocabulary of the PIE language. One of the best books on the subject is The Oxford Introduction to Proto-Indo-European and the Proto-Indo-European World by J. P. Mallory and D. Q. Adams, which I haven’t read yet. The Horse, the Wheel, and Language: How Bronze-Age Riders from the Eurasian Steppes Shaped the Modern World by David W. Anthony, which I have read, is fascinating. According to Anthony: 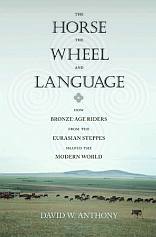 Indo-European linguists are improving their methods and making new discoveries. They have reconstructed the basic forms and meanings of thousands of words from the Proto-Indo-European vocabulary — itself an astonishing feat. Those words can be analyzed to describe the thoughts, values, concerns, family relations, and religious beliefs of the people who spoke them. But first we have to figure out where and when they lived. If we can combine the Proto-Indo-European vocabulary with a specific set of archaeological remains, it might be possible to move beyond the usual limitations of archaeological knowledge and achieve a much richer knowledge of these particular ancestors. I believe with many others that the Proto-Indo-European homeland was located in the steppes north of the Black and Caspian Seas in what is today southern Ukraine and Russia. The case for a steppe homeland is stronger today than in the past partly because of dramatic new archaeological discoveries in the steppes.

It is likely that peoples of the Eurasian steppes were the first to tame the horse, but the earliest wheeled vehicles were apparently ox-drawn carts. The faster horse-drawn war chariot was developed later and contributed to another phase of the Indo-European expansion. Between 1500-1200 BC you could find horse-drawn chariots in use throughout the entire landmass of Eurasia, from the border regions of Shang Dynasty China via Egypt and Anatolia to Sweden. This corresponds to the period of the ancient Vedas and the emergence of Vedic Sanskrit in India. Peoples speaking Indo-European languages have been attested throughout this area.

The Chinese imported the horse and wheeled vehicles, among other things, from the western regions of Eurasia during the second millennium BC. There were thus contacts across West, Central and East Asia at least a thousand years before what is generally seen as the beginning of the Silk Road. E. E. Kuzmina talks about this in The Prehistory of the Silk Road.
– – – – – – – – –
In The Making of Bronze Age Eurasia, Philip L. Kohl writes about early clay models of disk wheels and remains of wooden wheels and wagons with wooden wheels:

Such vehicles are among the earliest known examples of wheeled transport found on the Eurasian steppes. They may be roughly contemporaneous with or perhaps a few hundred years later than the now earliest well-documented carts from moors in northwestern Germany and Denmark (Hayden 1989; 1991: ptc. 7; and Häusler 1981; 1994). On current evidence, the diffusion of the technology of wheeled transport may have just as plausibly spread north to south from northwestern Europe with its forests of useable hard woods to the more open steppes to the southeast and then farther south into Mesopotamia as the reverse (cf. Bakker et al. 1999). The important point is not where this revolutionary technology first originated but rather how quickly it diffused across western Asia, Eurasia, and Europe during the Early Bronze period, underscoring the interconnections among disparate cultures throughout this vast area.

It is true that the technology spread quickly, but the earliest evidence is in Europe. It is quite possible that wheeled vehicles, one of the most important technological innovations in human history, were invented by prehistoric Europeans and were associated with the Indo-European expansion. The PIE word for “wheel” relates to words for “to turn, spin” while the words for wheel in Sumerian and Semitic appear to be loanwords from Indo-European. Kohl again:

[I]t is roughly around the middle of the fourth millennium BC that wheeled transport fist appears, stretching across a vast interconnected region from northern Europe to southern Mesopotamia (Bakker et al. 1999). The precise determination of which area or which archaeological culture first developed wheeled vehicles may prove impossible to document archaeologically simply because the technology diffused as rapidly as it did across this vast contiguous area. The question of origins, however, is much less significant than this phenomenon of convergence, this almost simultaneous evidence for the early use of wheeled vehicles stretching from northern Germany and southern Poland south across Anatolia to southern Mesopotamia, beginning ca. 3500 BC or immediately after the collapse of the gigantic Tripol’ye settlements….It is shortly after the introduction of wheeled transport that evidence for its massive utilization on the western Eurasian steppes is documented in the excavation of scores of kurgans containing wheeled carts with tripartite wooden wheels. These were not the chariots of a military aristocracy but the heavy, ponderous carts and wagons of cowboys who were developing a form of mobile Bronze Age pastoral economy that fundamentally differed from the classic Eurasian nomadism that is later attested historically and ethnographically.