Last Saturday I wrote about the Ramadan demands (and subsequent firings) of Somali employees at a JBS Swift plant in Greeley, Colorado. Last night I wrote about Muslim probes of the infidel world, and the fact that they are going on all the time, even if we don’t recognize them.

Today these two topics have converged. Once again, it involves Somali employees at a JBS Swift plant demanding prayer privileges for Ramadan. This time the aggrieved employees are in Grand Island, Nebraska. According to The Grand Island Independent:

Muslim Protest for Right to Prayer 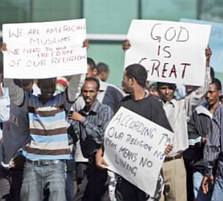 Members of the B shift (3 to 11:30 p.m.) and some members of the morning A shift walked off the job after being denied time to pray during what they said is the holiest of times for them — Ramadan.

Some of the signs that are visible in the protest photos:

“Swift is against our religions”

“According to our religion no pray means no living”

And how is JBS Swift against their religion? Precisely how are they being denied their freedom of religion?

A group of protesting women said they were kicked by a supervisor when they attempted to pray at work.

Asha Abdi said she knelt to pray when the supervisor said, “You can’t pray here,” kicked her feet and told her to go home.

Another woman, Hawo Mohammed, said she told her production supervisor she needed to go to the bathroom. She attempted to pray quickly in the bathroom until the male supervisor followed her in and told her she was taking too long.

“The main point is freedom for religion,” said Ridwan Abbi, a second-shift production worker who gladly supported his peers.

One may certainly object to Swift’s policy, and abhor its attitude. But how does the setting of a work schedule by a company violate anyone’s religious freedom?

It’s well-established that Christians can’t pray in school. Why doesn’t that violate their religious freedom?

Crosses and Stars of David are considered unacceptable accessories in many workplaces. But that’s not a violation of anybody’s religious freedom. It’s just part of being a grownup: you accept the rules set up by your employer. If it bothers you too much, you find a job elsewhere.

But Islam is different. Stopping a Muslim from praying at the appointed times is a violation of his human rights.

“The company said we aren’t going to give you any time to pray, but this is a free country,” said Ahmed Abdi, a spokesman for the largely Somalian group, who formerly worked at the plant. “We are Muslim and this country is about freedom.”

We’ve often pointed out the fact that Muslims in the West generally don’t assimilate to their adopted countries. But it’s remarkable how quickly they acquire the widespread American attitude of grievance and entitlement: “If I can’t do everything I want when I want, it’s a violation of my Constitutional rights! I’m gonna sue!”

Make no mistake: this is another probe. The Greeley probe met resistance, so another probe was launched in Grand Island. JBS Swift has a lot of plants across the country, and the Muslim organizations assume that one of the locations will eventually get tired of all the hassle and cave in to the protesters’ demands.

Abdi said the protests will continue with each shift until something is done.

“Enough is enough,” he said. “We came to City Hall today to let the leaders know this is serious.”

The last paragraph of the article shows that these events are actually a follow-up to an earlier probe in Grand Island. The first one happened last spring, and met with some success:

Last spring about 125 Somali workers resigned from the Grand Island Swift plant, but about 70 returned to work after Swift and the workers’ union, the United Food and Commercial Workers Union Local No. 22, worked on the issue. The plant said then it couldn’t accommodate prayer time, but did move many Somalis to earlier shifts that better fit their prayer schedule.

JBS Swift made concessions, and that’s why the Somalis are back with another demand. There will always be another demand, until full sharia is instituted in Nebraska, and the green flag with the crescent and star flies over the state house in Lincoln.

That’s the way these probes work. The ratchet turns in only one direction.

2 thoughts on “Another Ramadan Probe”