I have written previously about the Danish Buddhist Ole Nydahl, who is a staunch opponent of the Islamization of his country. Our Danish correspondent TB writes with the latest news on Mr. Nydahl:

The other day there was a very interesting program on Danish radio. It was about Buddhism and the well-known Danish lama Ole Nydahl. He opposes Islam, which he calls one of the gravest dangers to the world today. Uriasposten has some excerpts in Danish from the program.

My translation comes further down. First a little cut and paste from Wikipedia:

Q: What is your biggest fear today? 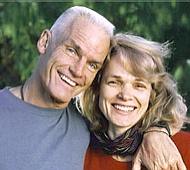 “I have two fears for the world: overpopulation and Islam. Those two things could destroy the world, which could otherwise be a beautiful place. Overpopulation means that a lot of people are born under conditions that are not human. We should pay the poor countries, the poor people, to have less children. If we give them a couple dollars a day, they can have one or two children and educate them instead of having 10 that sit around begging and cannot do anything.”

When asked if it is the task of a Buddhist teacher to address social and political issues Ole Nydahl responded:

“… If the people who can see further don’t speak, they are shirking their responsibility. I always say, ‘I don’t have to be popular, but I must be right.’“

“… The teacher must act as he speaks. He should also not simply avoid confrontational subjects but point out the causes of future trouble like overpopulation in ghettos and poor countries, and the growth of Islam. If a teacher always tells sweet nothings he is not protecting his students.. He must be willing to offend some. This is his responsibility.”

And now for my translation of excerpts from the interview with lama Ole Nydahl:

Ole Nydahl, lama: We have liberated Buddhism from a lot of culture…When entering a temple you bow three times; well, we cannot do that anymore. Makes you look like a Muslim.. And under no circumstances do we want to be compared to nor mistaken for a Muslim. So I just got rid of that (the bowing) and told my teachers about it later. We cannot be seen there, lying with our noses against Mecca and our butts in the air and stuff. It is simply not acceptable. And my teachers understood immediately. They read newspapers as well… So there are a lot of things. We have to be careful not to be too cultural, Tibetan cultural, and work inside the framework we have got here and the Danes have always had a great sense of humor, and I have that too. If something looks stupid, we simply don’t do it.

Anders Laugesen, P1: The relations with Christianity, to the old culture in Europe.

Ole Nydahl: Yes, I am thankful for it every day and I protect Christianity every day, especially because I see a big attack from Islam, a great, great danger from Islam, because they are having so many kids, and they become brainwashed in their schools from the age of three. They hate us — a lot of them, they really don’t like us, and even though we do anything for them — they still don’t like us. That is why I protect Christianity everywhere I can. Really, I do. Another thing is that the people they want to put against the wall first are us. Because we have no gods — we are much worse than those who have strange gods. We are the far side. Hindus and Buddhists will be the first to go. Christians and Jews they dhimmify, and dhimmis are actually people with very restricted possibilities and stuff like that.

Anders Laugesen, P1: So what you experience is that a greater antagonism has developed between Islam and Christianity — and Buddhism also.