There’s never any shortage of racial grievance in America. On average, once every twelve seconds a member of a protected minority is offended.

The most recent example of deadly hate speech occurred the other day in a state that is normally a shining example of beneficent Multiculturalism for the rest of the world — namely, California.

According to The Sacramento Bee :

Jim Thrasher and his wife were enjoying the California State Fair this weekend until they came upon the Colusa County exhibit.

For the African American couple from Sacramento, the exhibit’s depiction of “Waldo Watermelon Seed” conjured up painful images of the Jim Crow era.

“It brought back memories of my childhood in Ohio where the Klan still marched, when racism was overt, all the name-calling I and my family had to endure,” Thrasher said. “Those kinds of characters were very common, and I’d like to see some sensitivity on the part of the county administration to do something about it.”

Below is the graphic realization of a hate-filled stereotype that so offended the Thrashers: 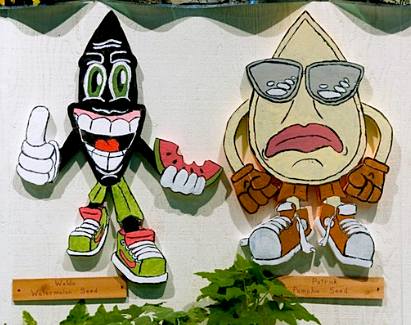 
Are we offended yet?

I know I am. Personally, as a Beige-American, I’m offended by Patrick the Pumpkin Seed. He’s obviously a deliberate slur on all of us unfortunate enough to have European ancestry.
– – – – – – – – –
Not only that, he’s got lipstick on — it’s an insult to Gay-Americans!

Furthermore, he appears to have rickets! Why isn’t the handicapped lobby up in arms?

In response, the Colusa County authorities took a courageous stance. As soon as the visitors complained, the County Fair defended the First Amendment rights of the exhibitors by taking Waldo down:

After The Bee’s inquiries, Colusa County representatives took down the image Wednesday. “They don’t want to offend anybody and will modify the exhibit,” said Brooke Converse, a fair spokeswoman.

What makes the irony of this little news tidbit so finger-lickin’ good is that the artists who created the offensive hate-filled material are disadvantaged teenagers, most of them from minority backgrounds. According to a follow-up article in the Bee:

The youths “faced the challenge of creating a display to celebrate the strengths of Colusa County’s agriculture industry while paying homage to the State Fair’s theme, ‘The State Fair Goes Hollywood,’“ Kemp-Williams said in a statement.

Colusa County’s seed-producing crops generate $30 million a year, so the young men, under the guidance of teacher Ralph Minto, “decided to create a display honoring the world-traveling seed stars of the county: watermelon, cucumber, pumpkin and tomato,” Kemp-Williams said.

“The boys were assigned the task of drawing caricatures of the seeds — characteristic of their ages and this era, they drew sharp images worthy of video game or Cartoon Network debut,” Kemp-Williams explained.

These boys should be the darlings of the progressive California establishment, given that they’re mostly “brown”, and in juvie to boot. But no; they committed heresy against to Multi-Culti gods, and their crimes must not go unpunished.

Notice that the defense never questions the Multicultural premises of the race grievance industry:

“We are saddened that the fine work of these young men is now cast under a cloud of unintended racism,” she said. “We ask that you applaud their hard work and know that they were working to honor Colusa County with their artistic depiction of a genre of ‘ag’ products produced in stellar quantities by the county: seeds.”

As it turns out, the Fair officials — who probably slept through their mandatory diversity training courses — failed to do sufficient diversity research. They didn’t clear the exhibit through their own cultural advisors before it was opened to the public:

The fair has a Cultural Advisory Council that includes African Americans, but Converse didn’t know if any had seen the exhibit. She said there is no formal approval process for county exhibits.

According to University of California, Davis, professor Patricia Turner — a leading national authority on African American images — such caricatures are likely to have a different impact on blacks who lived through the civil rights era.

The Jim Crow caricatures “harken back for many people — particularly the older generation — to the period when there were only derogatory images of African Americans,” she said.

And here’s the clincher:

Whether intended or not, the melon-eating caricature in the Colusa exhibit is reminiscent of early 20th-century images that include “the large, toothy smile, garish green pants and white minstrel gloves,” Turner said. [emphasis added]

It doesn’t matter what you intend. It only matters if you offend.

Every image, every news clip, every movie, every song lyric — all must be cleared in advance by the Multicultural Arts Committee, and certified to be Free of Offense.

Fortunately, Prof. Turner in her infinite mercy forgives the offenders, for they know not what they do:

She said she understands how “a young person oblivious to the history of all of this could have constructed the State Fair icon innocently.”

In other words, “Eat dirt, kiddos! You didn’t learn the sign language!”

Their leaders are fatuous and fearful, and it’s too bad for the boys.

Thanks to Dymphna, who contributed some choice invective to this post.