The arrest of Aafia Siddiqui a few weeks ago was one of the more cheering news items that came across my virtual desk. Today’s report that American authorities now have her thumb drive makes me happier still — that little bit of digital treasure undoubtedly contains a wealth of useful information.

Ms. Siddiqui — who is related by marriage to Khalid Shaikh Mohammed — was also carrying a copy of The Anarchist Arsenal by David Harber. (Yes! It’s on Amazon, and it gets five stars.) Not only that, she tried to shoot one of the American soldiers who came to escort her to her new quarters. She’s a piece of work.

And she seems to have been targeting some choice American real estate. According to The New York Daily News:

The targets: The Statue of Liberty, Times Square and the subway system. 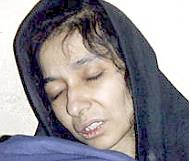 The suspect: a Pakistani neuroscientist with ties to Al Qaeda who had a list of New York landmarks, recipes for a witches’ brew of chemical weapons and glass bottles filled with mysterious liquids in her purse.

Law enforcement officials believe they have “the most significant capture” in the fight against terrorism in five years: Aafia Siddiqui, a 36-year-old MIT graduate arrested in Afghanistan last month for trying to shoot American agents and officers.

The alleged Mata Hari appeared in Manhattan Federal Court in a wheelchair Monday.

A judge delayed her bail hearing so she could receive medical treatment for the gunshot wound she suffered in the alleged attack on the American personnel.

Some experts believe Siddiqui is much more than that.

“She is the most significant capture in five years,” former CIA agent John Kiriakou told ABC News. “To find someone who has such rich information, computer hard drives, e-mails, that is really a major capture.”

Siddiqui was believed to be planning a possible suicide bombing when she was nabbed July 17, according to published reports. The criminal complaint against her says a search of her bag found “documents describing the creation of explosives, chemical weapons and other weapons involving biological material and radiological agents.”

She also carried with her excerpts from bomb-making bible “The Anarchist Arsenal” and a one-gigabyte portable hard drive.

This intelligence bonanza was probably at least as good as Abu Musab al-Zarqawi’s thumb drive, which was pulled from the pocket of his slightly shredded pants after he was sent off to claim his 72 virgins. But in this case they’ve also got the lady herself, who will receive the best in Western medical care so that she can recover soon and be ready for a bit of conversation.

Unfortunately, she’s in the hands of “law enforcement” rather than the US military. That means that she’ll get a full team of pro-bono ACLU lawyers and free sympathy spots on the news every night. Do you think the soldiers remembered to read her Miranda rights to her when the ISI handed her over?

And she’s being framed, of course. They always are.

Notice that her lawyer has a good respectable WASP name:

Investigators are testing Siddiqui’s saliva, hair and nails to see if she has been exposed to any chemical, biological or radiological materials.

Siddiqui’s lawyer said her client was being framed.

“They need a sacrificial lamb to prove that they were right all along on terror,” said Elaine Whitfield Sharp. “Maybe there are terrorists out there, but let’s get the real ones.”

Sources told the Daily News on Tuesday that Siddiqui carried with her a list of New York landmarks, including Lady Liberty and Times Square. ABC said the list also included the subway system and Plum Island, an isolated federal disease research lab off Long Island.

Siddiqui, a mother of three, was once married to a nephew of 9/11 mastermind Khalid Shaikh Mohammed, who is being held at the Guantanamo Bay detention center.

She has also been linked to Adnan el-Shukrijumah, a pilot and suspected Al Qaeda member who once lived in Florida.

When she set upon the U.S. agents who were questioning her after her capture, she grabbed a soldier’s M-4 rifle and tried to shoot him while yelling “Allah Akbar!” or “God is great!” She also said that she wanted to kill Americans.

After my elation over this news wears off, sober pessimism will no doubt return.

This woman is now ensnared in the American judicial process, and we all know what that means. She’ll be a superstar, fodder for Greta Van Susteren and the tabloids. A mother of three! She’ll melt our hearts.

Unlimited quantities of money dumped on her defense team by leftist foundations. Shocking exposés of the prosecutors’ secret lives on 60 Minutes. Puff pieces in The New Yorker and Vanity Fair. Evidence excluded on a technicality. A demand from the defense for the public testimony of certain still-active intelligence agents.

A hung jury, perhaps. If not, endless appeals, going on for years, finally arriving at the Supreme Court, a 5-4 decision…

3 thoughts on “The Jihadist Arsenal”