I have written several essays before on the damaging effects of Western feminism. The massive wave of violence and especially rapes in Western cities now is a form of warfare against whites, and it’s about time it is recognized as such. As this post from Gallia Watch puts it:

As in war, the winners seize the indigenous women all the while protecting their own. The whole rhetoric that aims to debase the European woman or France (‘I screw France like a whore’ says rap group Sniper) is a part of the feminization of the white race, of the idea that Europe is a land to be conquered, a habitat open to all forms of pillage. Are not the notorious ‘gang rapes’ another example of collective violence to European women, just as Russian soldiers did when they seized German women in a devastated Berlin in 1945. It all holds together. A tribe that does not protect its women is behaving as if they have already lost the war. Many of us don’t know this. But our enemies do.

As a Western man, I would be tempted to say that Western women have to some extent brought this upon themselves. They have been waging an ideological, psychological and economic war against white men for several generations now, believing that this would make you “free.” The actual result is that you have less freedom of movement and security than ever, as a direct result of the immigrant policies supported by you and your buddies.

In the big scheme of things, the truth is that white men have treated women with greater respect than the men of almost any other major civilization on earth. And I don’t mean just in the modern age, I mean for many centuries. Yet we are the one group of men who are most demonized and attacked, whereas non-white men get treated with much greater respect. What white men see from this is that white Western women prefer men who treat them like crap, and disrespect men who treat them with respect. This isn’t exactly a smart way to behave if you want to be treated with dignity.
– – – – – – – – – 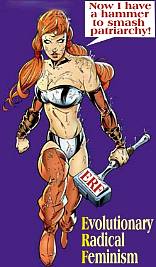 The truth is that any nation is always protected from external aggression by the men. The women can play a supporting role in this, but never more than that. For all the talk about “girl power” and “women kicking ass” which you see on movies these days, if the men of your “tribe” are too weak or demoralized to protect you, you will be enslaved and crushed by the men from other “tribes” before you can say “Vagina Monologues”. Which means that if you break down men’s masculinity, their willingness and ability to defend themselves and their families, you destroy the country. That’s exactly what Western women have done for the last forty years. So why are you surprised about the results? As you said, you can’t fool Mother Nature. Well, you have tried to fool her for a long time, and you are now paying the price for this.

Western women have been subjected to systematic Marxist indoctrination meant to turn you into a weapon of mass destruction against your own civilization, a strategy that has been remarkably successful. Here is a quote from Robert Spencer’s book Religion of Peace?:

Attacks on Christian history and doctrine are an integral part of a larger effort to instill a sense of cultural shame in even non-Christian European and American youth — a shame that militates against their thinking the West is even worth defending. A white American student, ‘Rachel,’ unwittingly summed up this attitude when she told American Indian professor Dr. David Yeagley in 2001: ‘Look, Dr. Yeagley, I don’t see anything about my culture to be proud of. It’s all nothing. My race is just nothing… Look at your culture. Look at American Indian tradition. Now I think that’s really great. You have something to be proud of. My culture is nothing.’ Yeagley mused: ‘The Cheyenne people have a saying: A nation is never conquered until the hearts of its women are on the ground…When Rachel denounced her people, she did it with the serene self-confidence of a High Priestess reciting a liturgy. She said it without fear of criticism or censure. And she received none. The other students listened in silence, their eyes moving timidly back and forth between me and Rachel, as if unsure which of us constituted a higher authority…Who had conquered Rachel’s people? What had led her to disrespect them? Why did she behave like a woman of a defeated tribe?’

63 thoughts on “The Failure of Western Feminism”