Update — Abu Elvis adds this: “I just remembered another fact: I have seen it published that Delilah was used succesfuly in the 2006 war against Hezbollah, three years after the story. So obviously nothing critical was compromised.”

The absence of reliable fact-checking in the MSM is old news. The blogosphere has been exposing the idiotic errors, both deliberate and unintentional, since the Dan Rather affair and even earlier.

And now the MSM has turned up some old news, mistaken it for current news, recycled it, and had it picked up by the Iranian media. Our Israeli correspondent Abu Elvis reports on this comedy of errors:

In 2003, defence contractor, IMI, held a test of Delilah loitering missile. They made a gaffe, and instead of encrypting, they freely broadcasted footage of the test. A few days ago, the Israeli Channel 10 site made a gaffe and republished many of the old stories as new, including a ten-year-old Dimona nuclear reactor story, and this story. Iranian news outlets picked it up, and without checking it, and published it as new.

It is obvious that it is not new, you can see Gabi Ashkenazi without chief of staff insignia on his uniform. That’s really obvious. 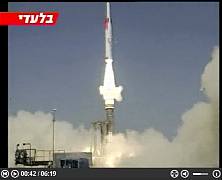 And the republished old story from channel 10 site is here.

The Iranians are selling it as new on Press TV.

There are more outlets that picked this up. Anyway, Delilah has been out of development for years, and was even featured in one episode of “Future Weapons”. Mack has been drooling about its capability to loiter over the target area as a UAV, and when given command, attack as a cruise missile.

A major gaffe by the Israeli military has cast shadow on the efficacy of security measures put in place by the regime’s defense ministry.

Many were gripped by shock after an Israeli TV channel found out that anyone could watch live the regime’s top secret missile tests using a simple satellite dish.

According to the report, defense ministry transmissions from a camera at the control center of a secret missile test had been available for all those who tuned in. The transmissions were originally meant to connect various control sites.

People in other Middle East countries including Iran and Syria were also able to witness “the top secret” missile test.

The report said all conversations at the command center including passwords of the defense ministry’s computers could clearly be heard in the footage.

Security experts say it is not clear how many people have witnessed the test and how much top secret information has been leaked in this way.

This is a sobering reminder of how wrong supposedly professional news organizations can be. Much of what floats around in e-space today is misinformation, disinformation, distortion, overblown nonsense, or outright lies.

I couldn’t get away with something as wrong as this, because alert and expert Gates of Vienna readers would be down on me like a ton of bricks within five minutes of my posting it.

One thought on “Recycling the News”