From The Local (image courtesy of Steen): 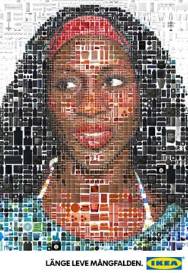 Flat-pack furniture giant Ikea launched its new catalogue on Thursday amid much coverage in the Swedish national press.

Each August, the arrival of the new Ikea catalogue is eagerly awaited in Sweden, and has become something of a national event. The catalogue is printed 198 million times and published all over the world, but Swedes really look forward to what must be one of the country’s most well-thumbed publications.

This year’s the catalogue’s theme is diversity — ‘mångfald’ — with Ikea claiming to offer even more living and interior solutions for the diverse way we live today.

In a press statement, Jeanette Söderberg, CEO for Ikea Sweden explained the thought behind the new catalogue’s diversity message.

“We are all different. We have different lifestyles, different tastes and different living situations. The diversity around us today isn’t just good, it is fantastic, giving more creativity and new points of view regarding our existence”, she said.

One could say that Ikea embodies today’s Swedish diversity — and conformity. The company’s employees in Sweden alone speak 44 different languages. At the same time, there is hardly a Swede in Sweden who does not own furniture from Ikea.