The love-feast is about to begin in Denver. The Democratic National Convention will convene beginning on Monday to anoint The One We’ve Been Waiting For as their candidate for President of the United States.

Before the convention proper begins, a small prodromal event has been arranged for tomorrow to create the right mood among the party faithful. It’s billed as an “interfaith event”, the progressive equivalent of a tent revival, and a host of stars has been invited to rouse the crowd with that New-Time Religion.

The Democratic National Convention Committee today announced the program for its first-ever interfaith gathering, which kicks off at 2 p.m. Aug. 24 at Wells Fargo Theater in the Colorado Convention Center.

“Democrats have been, are, and will continue to be people of faith — and this interfaith gathering is proof of that,” said DNCC chief executive Leah Daughtry, herself a Pentecostal pastor.

Most readers can guess the kind of show that will be put on. A lot of “Social Gospel” and radical politics can be expected, given the resumés that some of the participants will bring to the pulpit. Sister Catherine Pinkerton, head of the National Catholic Social Justice Lobby. The Reverend Lucia Guzman, the 2008 winner of the ACLU’s Carle Whitehead Memorial Award. The Black Liberation Theology advocate Leah Daughtry will be the MC of the event.

But for our purposes, the most intriguing guest speaker is Dr. Ingrid Mattson, President of the Islamic Society of North America. As the Traditional Values Coalition notes:

The presence of Dr. Ingrid Mattson with ISNA at this DNC interfaith service should be of grave concern to American voters. The ISNA is a radical Islamist group that pretends to be moderate. TVC’s friend Frank Gaffney with the Center for Security Policy, recently posted a column about Obama’s Islamist Problem and described the radical background of the Islamic Society of North America (ISNA). Gaffney notes that the ISNA is a creation of the Saudi-financed Muslim Students Association and is part of what’s known as the Muslim Brotherhood. According to documents entered into the trial of the Holy Land Foundation, the “work [of Brotherhood members] in America is a kind of grand jihad in eliminating and destroying the Western civilization from within, and ‘sabotaging’ its miserable house by their hands and the hands of believers so that it is eliminated and God’s religion is made victorious over all other religions.” FrontPageMagazine has more details on the ISNA. 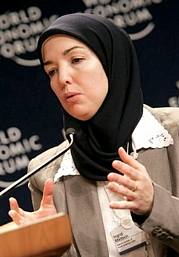 This is Dr. Mattson’s speaker bio :

Dr. Ingrid Mattson is Director of the Macdonald Center for the Study of Islam and Christian-Muslim Relations at Hartford Seminary in Hartford, CT. A native of Canada, Dr. Mattson has traveled the world and lived in Pakistan where she worked with Afghan refugee women. In 2001 she was elected Vice-President of ISNA and in 2006 she was elected President of the organization. Dr. Mattson is the first woman and the first convert to Islam to lead the Islamic Society of North America (ISNA).

However, there’s a little bit more to Dr. Mattson than meets the eye. As the TVC mentioned above, she’s connected via the ISNA and the MSA to the Muslim Brotherhood. And it turns out to be more than just a casual connection, since she has promoted the works of Sayyid Qutb in a course she teaches at Hartford Seminary.

Ingrid Mattson, President of the Islamic Society of North America: In Her Own Words