Fjordman sent a link to Dr. Helen’s blog, a link with an intriguing title:

“Where Have all the Vikings Gone?”

Since Dr. Helen is a forensic psychologist, and since Gates of Vienna often deals with things Scandinavian, her post was bound to be entertaining. 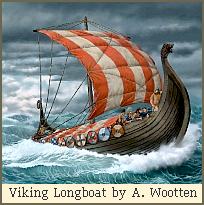 This morning, I read the magazine “What Is Enlightenment” that Glenn picked up for me from a local health food store because the cover had a number of articles about men including “Constructing the New Man,” “19 Powerful Women Tell the Truth about Men,” and “A Scandalous Look at Scandinavia: Where women are women and men are too.”

Due to time constraints, I will tell you about the main article that caught my eye–the one on men acting like women in Scandinavia. The author, Elizabeth Debold, sets out to Scandinavia to find out how “gender equality” is playing itself out in that culture. She starts out the article describing how in Sweden, for a man to pee standing up is increasingly considered to be “the height of vulgarity and possibly suggestive of violence.” Debold seems surprised to find out that gender equality is not all it’s cracked up to be, especially when she discovers that the new equality is nothing more than “patriarchy in drag.” Despite progressive sources that suggest that Scandinavians, particularly Danes, are the happiest people in the world, possibly because they are so egalitarian, Debold finds out that men there are not doing so well.

Apparently, relationships and having a good sex life is of the highest value in places like Denmark. Yet, Denmark has one of the world’s highest divorce rates. In eight out of ten cases, the woman ends the marriage. Debold attends a men’s group in Copenhagen and notes that “the men speak about a vague, almost inchoate experience of victimization.”

A guy named Bo states, “We end up relating to women in a way that is more like woman to woman, not man to woman. We are feminized in our relationships, and they don’t last.”

Well, Scandinavia is ahead of the curve in so many areas that this article is not surprising. What I read and hear in the US media is not that different from what Dr. Helen’s article described. Except for Islam, whose rules are a caricature of what should pertain between the sexes, most Western men express a similar dissatisfaction about intimate relationships with women. Men increasingly find themselves in a sea of mean girls.

These meanies, often called “Alpha Girls” grow up to be foolish women whose fundamental failing is a kind of social blindness. They cannot see for the life of them or their children that real maturity means coming to terms with the necessary differences between men and women. Not only is it necessary to come to terms with reality, but in order to reach any kind of contentment, one must honor the differences. Stamping one’s foot in vexation is not cute past the age of five or so.

The constant news articles in The Local about how women are cheated in life gives the outsider some clues regarding the life-and-death struggle these women have concocted. No doubt about it — Scandinavia is so extreme that some of the new rules for the war between the sexes (and yes, there always will be a war; we’re too different for lack of conflict to reign) are pathological.

Dr. Helen’s post reminded me of something I’d read in The Local. At the time, I think I sent it to a Swedish friend, but he never replied. Now I understand why. This garbage is for real.

After a lengthy search, just when I thought I’d have to rely on memory to explain how disturbing that “study” was, it finally popped up in a search of news stories from 2006.
– – – – – – – – –
The creepiness begins with the title:

It is troubling to see this kind of balderdash being passed off as reality. I remember turning away in disgust back then, but obviously since the memory stayed, the story had made an impression:

Swedish men are less intelligent, lonelier and fatter than their female counterparts, a new study claims. Boys have fallen way behind in school, and there are more women than men studying some traditionally male university subjects.

“In twenty years men’s dominance will be broken and women will have more power in society. There will be more female CEO’s and the wage gap will favour women,” researcher Ingemar Gens told magazine Att:ention.

Experts have also observed that smart women are struggling to find common ground with members of the opposite sex.

“There will soon be a large collective of uneducated, low-paid men who don’t have any friends, and are unmarried and alone – as well as uninteresting for women looking for a relationship.”

“This is already happening, but the problem is beginning to accelerate. This is a huge danger for men,” said Gens.

While reaching consensus about a sort of ongoing male crisis, not all those Attt:ention spoke to were certain that this would eventually lead to women assuming greater control.

“The power of the patriarchy is so great that education and similar factors are not so important.

“Other things play a bigger role, such as short-cuts and networks for example,” said Malena Rydell, managing editor of feminist magazine Bang.

Are the people who do these studies (and the fools who fund them) really this ignorant? Do they think that men and women live in different worlds and have no effect on one another?

Look at the way this has been structured: it’s a win-lose game, and the men are losing while the women claim that things still aren’t “fair.” Such whining is not only embarrassing to watch, even more so it is ultimately harmful to the whiners themselves. Imagine seeing men as needing to be “broken.”

In an article that abounds in cluelessness, this sentence is particularly ignorant about the effects of unintended consequences:

“There will soon be a large collective of uneducated, low-paid men who don’t have any friends, and are unmarried and alone – as well as uninteresting for women looking for a relationship.”

Do these people not know what happens when you have “a large collective of uneducated, low-paid men” in your midst? Can you say “gang”? Can you spell testosterone? Are these smart women intelligent enough to know that men shunted off into groups without women have a higher level of testosterone?

Sweden created this mess and they’d better start attempting to work mindfully toward a solution. Slamming men for being men is not the way to create a harmonious culture. And making sure that they are isolated into groups, separate from their female betters means what, exactly? Will these superior, educated and brilliant women have to hire bodyguards to fend off the groups of lonely, knuckle-dragging cretins who stand up to pee?

Misogynists are a bane, but we’ve always had them. This new crew, the one which hates and look down upon men, is much more disturbing.

I suppose they can make individual social decisions similar to those of the Chinese and Indian populations, but the mirror opposite – i.e., they can abort the males fetuses so they aren’t forced to raise stupid boors in their own homes. And they can use sperm donors for the cause. But eventually, they will have to deal with the ugly monster they create.

And what if their daughters someday have to deal with the vast cohort of lonely Asian men who sweep ashore in their long boats, looking for women? Come to think of it, was it that motive which impelled the original Vikings to sail for other shores in the first place?

Women will never be ‘free’ from the laws of human society; their foundations are cemented in biology. Those who rail on about their much-vaunted equality are umm…micturating into the wind (a very different experience without the anatomy usually conjured up by that metaphor).

In the fullness of time, these foolish women will be hoist by their own petard and left to swing in that cruel northern wind. It won’t be dignified or pretty…and being smart won’t save them.

Won’t keep them warm, either.

29 thoughts on “Did the Vikings Set Sail for Greener Pastures and Happier Women?”