The recent referendum in Ireland on the Lisbon Treaty was a setback for those who would turn the EU into a single superstate. But it’s not a major setback — the functionaries of the EU are adept at sidestepping such petty annoyances as the will of their peoples — and we can expect the EU’s leaders to regroup and try a different tack.

The next difficulty facing the Lisbon Treaty is the attempt to enforce the “harmonization” of laws on the member states. Some countries, such as the Netherlands and Germany, will have no problem swallowing the entire EU pig, since their existing laws are already in synch with the draconian requirements of the Lisbon Treaty.

However, countries that have held on to some vestige of independence, common sense, and sovereignty may not agree so readily to surrender their own laws. One of the areas of strongest disagreement concerns immigration, and Denmark has the most restrictive immigration laws in Europe, putting it at odds with the mandarins of the EU.

A recent EU court decision concerning Ireland is raising hackles in Denmark. According to the EU Observer:

A recent EU court immigration ruling is causing headaches for the Danish centre-right government and may deliver a blow to the country’s immigration policies, which are amongst the most restrictive in Europe.

What’s instructive here is the assumption that Denmark will automatically cave, and allow the EU rulings to supersede Danish law. But how likely is that? Yes, Anders Fogh Rasmussen, who is aiming for a comfortable EU sinecure, will likely kowtow to Brussels. But what about the rest of the Danes?

The European Union’s highest court ruled last Friday (25 July) in a case of four couples living in Ireland that spouses of EU citizens who are not themselves EU citizens can not be prevented from living in the Republic.

Previously, under Irish law, a spouse from outside the European Union must have lived in another member state first in order to win residency rights. However the court ruled that this is in breach of EU law on the free movement of citizens.

Inspired by the new EU ruling, a number of couples turned up on Monday (28 July) at the Danish Ministry for Integration in Copenhagen demanding a review of the ministry’s rejection of their applications to settle as couples in Denmark.

This is like the gay marriage issue in the United States — the most permissive and activist judges in one state decree the laws, and activists in other states immediately demand that the “full faith and credit” clause of the Constitution be applied, so that the laws must be honored in their own jurisdictions. That’s one of the primary disadvantages of centralization — the rules established by unaccountable bureaucrats at the center ride roughshod over the will of the people in the localities.

Notice the amusing twist in the next excerpt:

Having been denied residence in Denmark, many such couples settle in the city of Malmo in Sweden, about half an hour’s drive from Copenhagen, as Sweden has less restrictive immigration laws.

That’s an understatement; Sweden has almost no immigration restrictions, and a generous welfare package awaits the new arrivals in Malmö. No wonder “persons of Swedish background” are rapidly becoming a minority in the city.

There are indications that the Danes are not yet ready to roll over for the EU as far as immigration is concerned:

In reaction, the Danish minister in charge of immigration, Birthe Ronn Hornbech, has now announced a review of the entire system of immigration in the country. 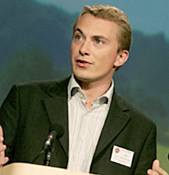 “The government must tell the EU system that it was a prerequisite for Danish EU membership to be able to run our immigration policies independently,” said the spokesperson on EU affairs of the right-wing Danish Peoples Party, Morten Messerschmidt, on Danish Radio.

The Liberal-Conservative minority government depends on the support of his party.

Yes, the Danish People’s Party is what stands in the way of complete European integration. Notice that the DPP is only “right-wing” here; apparently they have graduated from being “right-wing extremists” and are inching towards respectability.

Mr Messerschmidt suggested immigration should be covered by a Danish general exemption from EU justice policies, while legal experts have stated that the fundamental principle of free movement of citizens in the EU would supercede this.

So this is a contest of wills, between tiny but pugnacious Denmark on the one hand, and Megatron himself on the other. Who will win?

One suspects that Danish public opinion sides with Mr. Messerschmidt and the DPP:

Danish daily Jyllands-Posten published a comment on Tuesday (29 July) arguing that the EU court is doing the job of elected politicians.

“The judges are crafting a lot of policies because the politicians allow them the margin to do so. Political decisions that ought to be the responsibility of elected representatives are left with the court”.

Denmark, as usual, is the place to watch. The Danes are the wellspring of Western resistance.

12 thoughts on “The EU Lays Down the Law”