We’ve written previously about the “burkini”, the total-body swimsuit devised so that Muslim women can enjoy natatorial activities without violating the principles of Islamic modesty.

The burkini is evidently in vogue now in Sweden. CB, one of our Swedish readers, sent an email last night about an article in a popular Swedish newspaper:

I found this article about burkinis in the Swedish tabloid Aftonbladet. The article itself is a usual Muslim-chic article, with no words about the misogynistic and bigoted religion that demands this from their women. But I have a feeling the people at Aftonbladet had another idea about the outcome of their picture… 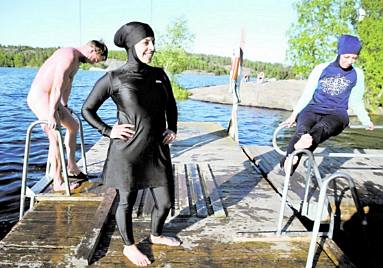 Take a hard look at the man in the background! Well, you probably don’t have to take that hard a look after all. Shall we receive laughter or violence after this? I hope for the first…

Needless to say, I was nonplussed. Look at those two women, wrapped up head to foot, and behind them on the dock is a naked man to whom they are not related!

Mustn’t they now be killed by their male relatives in order to salvage the honor of their families?

I was intrigued by the story, and asked our Swedish correspondent Reinhard to translate the article. He kindly did so, and added this note when he sent the translation:

You might want to mention that three of Sweden’s four major newspapers all have stories on the burkini at the same time. The Expressen article has the headline “Now the success, the burkini, comes to Sweden”. DN is more neutral.

And here’s the full translation of the article, in all its gushing loquacity:

How to become a burkini babe

Forget minimal swim trunks and revealing swimsuits. The latest fashion in watertight swimwear is the burkabikini.

In Australia the swimsuit has become a real sunshine tale for Muslim girls. The “burkini” is now being sold in Sweden for the first time.

“I absolutely think this is going to be a hit. Maybe not next week, but eventually. The stores have to take the risk,” says Pontus Wiklander, marketing chief at AWP Design, which sells the burkabikini.

First swim of the year

For sisters Lama Abu-Iseifan, 26, and Salam Abu-Iseifan, 30, it’s time for the first swim of the year. They change their attire and become burkini babes and throw themselves into the water in their body-covering suits.

“It’s a really great idea, and much better than jumping in the water fully clothed, as many Muslim girls do,” says Lama. It’s been several years since Salam swam outdoors. Her faith makes her not want to show too much, and wearing a bikini in public feels strange.

Protection against the sun — and staring

“I have the burkini to thank for being able to swim this year,” she says, and takes another stroke. The bathing burka protects both against roving eyes and sunburn, and Lama and Salam think that there’s a demand for it.

Bathing fashion for everyone

“I could absolutely wear one of these this summer. I have no problem with being fully dressed on the beach,” says Salam. They think it’s fun that there’s now a bathing fashion for everyone.

But they would like to see more colors and models.

Aftonbladet’s fashion expert Sofi Fahrman agrees. She sees the bathing burka as a sign of the times.

“It’s definitely going the right way, even though it’s not that attractive.. A black body stocking isn’t really pretty. With colors and patterns it could be a lot more appealing,” says Sofi Fahrman.

CB sent us a follow-up note to offer his editorial opinion on the whole issue:

Apparently the tabloid wanted to make a photo-op for a section called “Sophie’s fashion”. The kicker is they picked the day when they had nudist bathing at that particular lake in Stockholm. If by choice or not, the story does not say.

What the story says is that this is possibly a growing fashion. They also mention that this burkini is originally a total-covering swimsuit from Australia. The “Muslim” part must be the hijab-looking head cover. Actually, I’ve seen some ads about the burkini from AWP before this. But in a more “Muslim setting”, so to speak (without the nude man, that is).

I can’t tell if the people from Aftonbladet knew that there would be naked people there or not, but the two females? They say they don’t like ordinary bikinis, since they get prying looks and they want something like this. I wonder though if they knew they were to be in the same picture as that man, when this was to be published.

But, as I see it, it’s partly besides the point. Whether they were acting the Muslima or are the real deal — both they and the tabloid are conveying some things clearly:

One could just imagine what this reporter would have said if it was ethnic Swedish men demanding this of their women — due to their Christian beliefs… But since this is Islam and Muslims, too many times it seems that critical reporting goes out the window. I think this type of Muslim-chic article is seriously damaging to women’s freedoms and liberties and the liberties of all who don’t seek sharia, since it presents the effects of sharia as something normal in our lands as well as in Muslim lands.

One final observation: when I obtained the full-resolution version of the photo to prepare it for posting, I noticed that — not surprisingly, given the water temperature in a Swedish lake — certain… ahem… anatomical features were prominently visible on one of the young ladies.

So let’s get real, folks.

This burkini, no matter how artfully designed, does not meet fundamentalist Muslim standards of female modesty. And no self-respecting Muslim man is going to let a woman under his control appear in public wearing one, whether or not there are any naked infidel men nearby.

This is not about meeting strict Muslim standards of modesty. It’s about demonstrating who’s in charge.

20 thoughts on “What’s Wrong With This Picture?”