I reported Monday night on the upcoming demonstration at the Islamic Saudi Academy in Alexandria. The event went off as planned early the yesterday morning. One of the protesters emailed me this afternoon with this brief account:

The demonstration made both The Washington Times and The Washington Post, and got a lot of TV coverage. This is the kind of thing — against the Saudis — that will get MSM coverage. Also, the sex abuse charges contributed to the media attention.

Gerald Connolly, the chairman of the Fairfax Board of Supervisors, is on the videotape, and he gets quite testy and silly — says we’re all bigots. All this has happened due to his support — the whole Islamization of Northern Virginia. 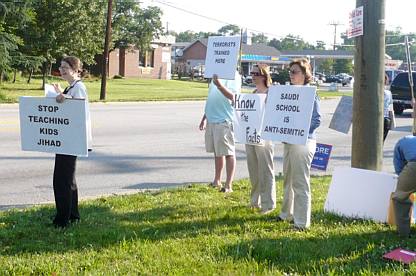 I didn’t look for the WaPo article — I stay away from that paper as much as I can — but here are some excerpts from the online version of the Times article : 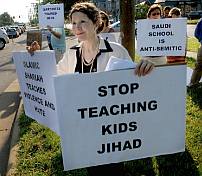 The arrest of a top official at a Saudi-financed school in Northern Virginia has fueled further criticism of the institution following findings released last week that say its textbooks contained violent and intolerant language.

“They’re free to come here and worship, but they are not free to come here and teach hate,” said Andrea Lafferty, executive director of the Traditional Values Coalition and one of about 15 protesters that gathered Tuesday morning outside the Islamic Saudi Academy’s main campus in Alexandria.

The academy — a 900-student private school with campuses in Alexandria and Fairfax — has been the subject of renewed scrutiny after an investigation by the U.S. Commission on International Religious Freedom found that textbooks used in the school contained passages that blame Jews for “discord” and say it is sometimes permissible to kill non-Muslims.

The school’s director general, Abdalla Al-Shabnan, was arrested June 9 and charged with obstruction of justice — a misdemeanor count that follows accusations that he failed to report an allegation of child abuse made by a student at the school.

A 5-year-old girl at the academy’s campus in Fairfax said she had been sexually assaulted by a family member, according to court documents. Mr. Al-Shabnan, 52, met with the child’s parents, documents show, but did not notify authorities of the complaint within a 72-hour period required by Virginia law.

“At no time did [Mr. Al-Shabnan] report the allegations to any child protective agency or law enforcement agency,” an affidavit for a search warrant filed in Fairfax County Circuit Court says. “He further stated that he was not aware that he was required to make such a report.”

Court documents also say Mr. Al-Shabnan “stated he did not believe [the girl’s] complaint and felt she may be attempting to gain attention.” He ordered a written report of the incident deleted from a secretary’s computer at the Fairfax campus, documents say.

Protesters on Tuesday said the director’s arrest was another sign of trouble at the academy. The textbook review conducted by the federal panel focused on 17 books used during the last school year and obtained from independent sources.

The passages found in the review include a 12th-grade Koranic interpretation textbook that states it is permissible for a Muslim to kill those who have left the faith and one that says “the Jews conspired against Islam and its people.”

“That’s absolutely not true,” said Rahima Abdullah, the school’s education department director. “What we teach here is love and tolerance.”

The school has since released a statement calling the panel’s report “erroneous” and saying it “contains mistranslated and misinterpreted texts.”

“We have new books now, and the ones the commission is talking about have been out of use for some time, and were misinterpreted then,” Ms. Abdullah said.

This school would not be attracting all the media attention if it hadn’t been for the child sex abuse charges. The Islamization of Northern Virginia isn’t news enough by itself — somebody had to hurt an innocent little kid before the TV and the newspapers could interest themselves in it.

But the spotlight is on the Islamic Saudi Academy now. We’ll see what happens next.

Several videos of the demonstration can be found here.

9 thoughts on “The Protest at the Islamic Saudi Academy”