There has been a lot of discussion in the last few years about the part that Iran plays in instigating and maintaining the deadly conflict in Iraq between the Shia militias (and sometimes even the Sunnis) and the forces of United States military. There’s no real argument about whether Iran is involved; the questions revolve around how involved, and in what ways.

The Bush administration seems to play down the Iranian aspect of events in Iraq, because public acknowledgement of Iran’s role would implicitly recognize a casus belli, and the United States does not want to discuss the casus when it is unwilling to contemplate the subsequent bellum. 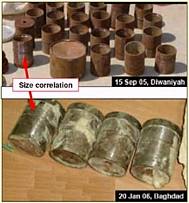 But Iran is definitely sowing trouble in Iraq. Right Side News writes today about Iran’s role in building and exporting Explosively Formed Penetrators (EFPs) for use in Iraq, particularly for the purpose of killing members of the US military.

It’s important to remember that the source for this story, the National Council of Resistance of Iran, is not an objective one, and its reliability is open to question. It has been called a “hotbed of hardline monarchists”, and was designated an “organization linked to terrorism” by the US State Department in 2003.

Even so, the information given in NCRI’s press release is intriguing, rich with detail, and deserves close scrutiny. Here’s what Right Side News says:

On Tuesday, the National Council of Resistance of Iran (NCRI) in a press conference in London exposed the Iranian regime’s manufacture of new and advanced EFP (roadside) bombs in three secret centres in Iran. Also exposed were the names and particulars as well as the methods used of 51 networks smuggling the weapons on behalf of Iran’s Qods force to terrorist militias in Iraq. The advanced EFPs can penetrate deeper into armoured vehicles causing more deaths and advancements have also made them more difficult to detect and defuse. I have attached the press release, the information provided at the press conference, as well as the 51 networks and their detailed work.

Despite claims from some quarters that the regime has in recent months reduced its terrorist involvement and the transfer of arms and Explosively Formed Penetrators (EFP) to Iraq, reliable intelligence reports show that the Islamic Revolutionary Guards Corps — Qods Force (IRGC-QF) continues to train and despatch terrorist networks and transfer arms and roadside bombs to Iraq. I can confirm today that based on new accurate information put at the disposal of the National Council of Resistance of Iran by the main democratic opposition group, the People’s Mojahedin Organisation of Iran, the regime is behind more than 80 percent of all EFP and other deadly attacks across Iraq. The only difference now is that the regime is being more sophisticated about the methods it uses to transfer this lethal technology to Iraq. It now uses smugglers and other methods to cover its tracks.

Iran’s arms production industry has intensified its production of EFPs and has developed deadlier models, which are being transferred en masse to Iraq and Afghanistan.

The smugglers are operatives of the various groups and parties that have ties to the Qods Force, including the Badr Organisation, the Supreme Islamic Iraqi Council (formerly known as the Supreme Council for Islamic Revolution in Iraq, SCIRI), the Hezbollah Movement, and the Mojahedin of the Islamic Revolution. These networks receive arms in Iran in coordination with the tactical Fajr, Zafar, Ra’ad and Nasr garrisons. They then smuggle the arms into Iraq from the border region using the extensive resources they receive from the regime.

The activities of these special terrorist networks are administered by the Qods Force in Iran and they are directed by veteran commanders with ties to the Qods Force, such as Abu Mehdi Mohandes and Abu Mostafa Sheibani. The transfer of arms is being conducted by indigenous Iraqis who are directly overseen by the Qods Force. These operatives are in contact with both the Qods Force and the regime’s Ministry of Intelligence and Security (MOIS).

The arms and EFPs which are being sent to Iraq are being put at the disposal of terrorist militias linked to the Qods Force. They are also being made available to the Badr Organisation, and through Abu Hassan Ameri, to terrorist groups based in Iraq such as al-Qaeda. The Qods Force is responsible for providing more than 80% of the arms, ammunition and bombs being used across Iraq.

According to accurate information obtained by the sources of the People’s Mojahedin Organisation of Iran, in recent months more than 30 active networks have been identified smuggling weapons and ammunition in Diyala, one of the six Iraqi provinces bordering Iran.

Read the rest, including a wealth of detail about the smuggling routes and the groups involved, at Right Side News.

9 thoughts on “The Long Arm of Iran”