We’re all familiar with the Islamic Protection Racket. It’s standard operating procedure for Muslims who live in the West. The process runs something like this:

The other day I posted about a Mohammed-insulting cartoon that was published in a Norwegian newspaper. Now it seems that Norway has reached Step 6 in the good ol’ Islamic Shakedown: the Pakistani ambassador to Norway has issued some thinly-veiled threats (as translated by our Danish correspondent Kepiblanc): 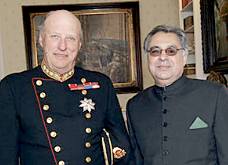 [Photo caption: Visiting the king: Ambassador Rab Nawaz Khan was received by King Harald at an audience when he arrived in Norway 2006. Now Khan firmly opposes the drawing in Adresseavisen.]

Notice in the photo how much the ambassador resembles a Mafia don — or am I just prejudiced?

Earlier this week the newspaper published what is seen by many as a caricature of the prophet Muhammad. The ambassador fears the consequences when the drawing becomes more widely known in large Islamic countries, such as Pakistan.

“Muslim societies all over the world will be offended. This is an act of terror,” says ambassador Rab Nawaz Khan to TV2.

“Don’t forget that there are many Norwegian companies in Pakistan,” says Khan.

The embassy has handed over a formal note of protest to the Ministry of Foreign Affairs (UD).

Spokeswoman Anne Lene Dale Sandsten of the UD says that the protest is taken seriously, but she declines to comment in detail about the ambassador’s claims. She fears that doing so might escalate the whole affair.

Kepiblanc included with his translation an afterword with some background on the situation in Norway:

Translator’s notes: Adresseavisen is a very old, historic term originating way back when newspapers were more like ‘bulletins’ or ‘journals’ combined with advertising. This particular daily is Norway’s oldest, situated in Trondheim — one of the best-known Viking settlements.

By the way, according to the newest poll in Norway, Fremskrittspartiet — Norway’s version of “The Danish People’s Party” — has surpassed the other political parties in Norway and is currently the biggest party in the country. It is strongly opposed to immigration, especially Muslim immigration. If Norway had an election right now, the party’s chairwoman, Siv Jensen, could become Prime Minister. Alas, the Norwegian Constitution doesn’t allow elections outside a fixed, four-year schedule.

7 thoughts on “Putting the Screws on Norway”