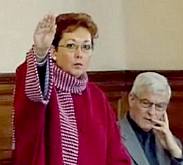 If you followed the protracted controversy about Vlaams Belang last fall, you’ll remember Maria De Berlanger, the local politician and Vlaams Belang party member who was accused of heiling Hitler when she took the oath of office.

From the beginning Ms. De Berlanger stoutly maintained that she did nothing of the sort. But once it is flung, the charge of “Nazi!” sticks tight. You’re guilty until proven innocent, and it’s all but impossible to prove your innocence.

However, the verdict is now official: Maria De Berlanger was not giving the Nazi salute. Even the Belgian government, which has long shown antipathy towards Vlaams Belang, found her to be blameless.

Below is an article from last Friday’s De Telegraaf, kindly translated by our Flemish correspondent VH:

Amsterdam — It is not true that Vlaams Belang Councilor Maria De Berlanger gave the Hitler salute while taking the oath. That was the judgment of the Brussels Court. With this verdict the Vlaams Belang politician will be free from a possible fine or (conditional) imprisonment.

From the very beginning — on October 8 in 2006 — the woman stood firm about it not being a Hitler salute, but said that she held her arm diagonally to prevent her sleeve from sliding down. The court now finds her story legitimate.

According to the court it was clear that the woman doesn’t cherish any Nazi sympathies, for one reason because the De Berlanger-Lichtert family were victims of Nazi persecution.

The “Center for Opportunity and Fight against Racism” [Centrum van Kansen en voor Racismebestrijding] were not proven right. The organization had been convinced that the Councilor deliberately gave the Hitler salute, and therefore filed the charges against her. [emphasis added]

If the Belgian judicial system couldn’t turn a member of Vlaams Belang into a Nazi, then it can’t be done. Case closed.

Now I’ll wait for all the outlets that slammed this poor woman so prominently last year to pay at least as much attention to her exoneration.

18 thoughts on “Another Imaginary Neo-Nazi Debunked”